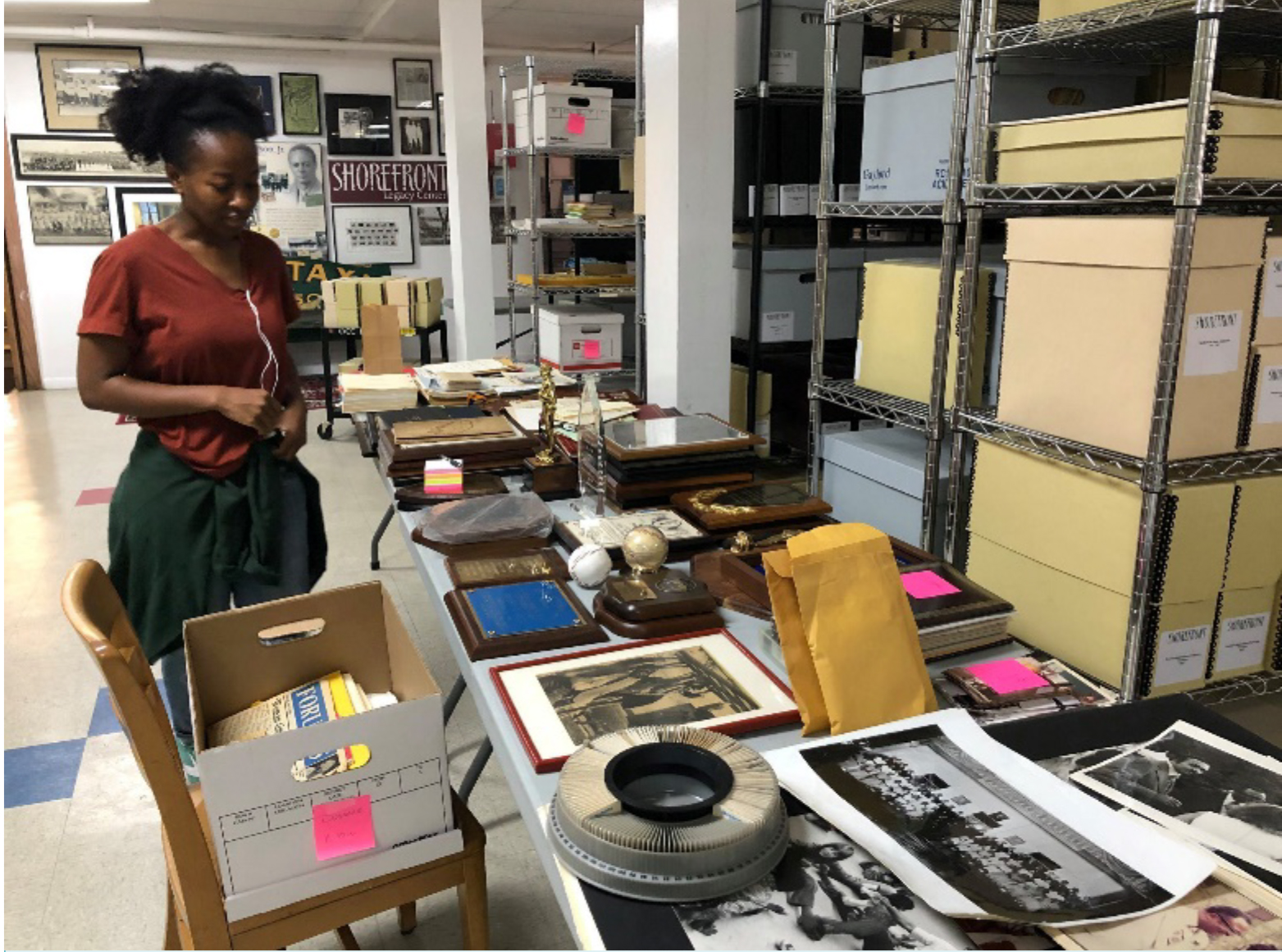 Processing then Joseph Hill Collection at the Shorefront Legacy Center

Coming into this summer, I had successfully finished my first year of Northwestern’s Screen Cultures Ph.D. program in the School of Communication. After a year’s worth of reading and writing about black storytellers across media, I decided to put that learning to public use and engage. The Center for Civic Engagement’s inaugural Chicago Humanities Initiative program gave me the opportunity to do just that this summer as an intern for a local organization. In picking a practicum spot for my internship, my goal was to serve an organization that aligned with my intentions around legitimizing black stories and the authors who create and preserve them. Shorefront Legacy Center revealed itself to be such a place.

The history I’ve been able to help preserve this summer is one centered around integration in Evanston during the late 1960s and the inherent connection between life, work, and civic duty among black leaders in the community at the time. Part of that history has been cultivated through the life and philosophy I was able to extract from the three rows of banker boxes filled with artifacts in Shorefront’s archival stacks, all labeled “J. Hill”.

“Theres no such thing as a child who can’t learn. The only thing we have to do is to learn how to teach him.” -J. Hill (6)

Joseph E. Hill was a child of the 1920s, born to descendants of African American slaves in Marion, Illinois. At the age of three his father moved their family out of Marion’s coal mining country to escape the violence that came with the worker’s efforts to unionize. The family settled on Darrow Avenue in Evanston, right across from the all-black Foster Elementary School, which Hill attended in his youth (1). After a stint in the Army Air Corps during World War II and years of service in Evanston’s School District 65 as a physical education teacher and district administrator, Hill became a critical player in the integration of Foster. His former elementary school had become the major touchstone for de facto segregation in the city. As the first black principle of Foster (active during the year of integration), a member of the Citizen’s Advisory Committee on Integration, and as interim-turned-permanent Superintendent in the years to follow, Hill’s influence was imperative to the successful integration of Foster and further, the creation of the Martin Luther King Jr. Laboratory School.

Rummaging through the boxes of awards, newspaper clippings, and pictures that belonged to Hill, I came across interviews that exposed his educational philosophy, a philosophy grounded in fairness. This is what made him especially fit to be the face of this sensitive operation and able to manage the community’s concerns post-integration.

“The worst thing you can do to a minority group student is to expect less from him than you do from the rest of your students. In my mind this is a far greater sin than out-and-out segregation. It is infinitely more harmful to the individual” -J. Hill (2).

His beliefs in the educative power of integration and academic priorities as a teacher, administrator, and superintendent were shaped by his own experiences attending the very school at the center of the social shift. In Lawrence Brook’s 1967 documentary titled Integration of Foster School, Hill explains his belief in the power and importance of integration as it pertains to not only the quality of education received by students but also to their socialization. The process would allow them to get acclimated to the world’s diversity at a young age. In the film, he states:

“A person who has gone through and lived through both segregated and integrated educational experiences, personally I can say that there is really no comparison between the two. A person who is living in an integrated school environment is living in an environment that is more real to life. This is the kind of situation that he’s going to live, compete in, and he should have the opportunity to be exposed to this kind of situation as soon as possible. The kinds of attitudes that develop as a result of segregated education I think are apparent to all of us. Many times, I’m sure that you have seen youngsters who just had very little if any motivation and it’s pretty hard to answer the questions that they ask. ‘Why is everything around me the same?’ They need the opportunity to share and to interact with children from various cultures and from various backgrounds”. (3)

His likability and social acumen came not only from his hometown hero success story in the education system but also from his immersion in the Evanston community at large. Hill and his wife Carmelia, also a revered educator in the city, became leaders and members of social clubs and organizations ranging from the Evanston Chapter of the NAACP, Jack and Jill, and North Shore Links to the National Alliance of Black School Educators, their respective sorority and fraternity affiliations, and even local bridge clubs. They were active members of their church and often sought out information to bring back to the community through international conferences and connections outside of the district.

Hill’s stance and social standing in the community made him an ideal translational figure for the school district’s attempts to maintain integration momentum and balance out the energies working on the school board during the 1970s. Teacher meetings were often where his crosscultural abilities shined.

“Every now and then someone will come to me and complain that they don’t know how to approach a black youngster. If they call the kid ‘boy’ he’s offended. But they say they don’t feel comfortable calling the youngster ‘man’ because of his age. So I tell them, ‘Why don’t you try calling the kid by his name?’ -J. Hill, speaking to local teachers, 1971 (4)

In paper clippings from the era, Hill is championed by reporters as qualified and capable of what the district needed at the time. “A quiet, soft-spoken and deliberate man, Joe is ideally suited, by training, experience and temperament, for primary school superintendency of affluent, multiracial, urban-suburban Evanston”. (5) After his first appointment to Interim Superintendent in 1970 (appointed to the official title in 1975) and retirement in 1981, Hill came back to serve in the seat again in 1987 for several months, to the community’s joy. It is clear that Joe Hill was a community member who willingly stood in the gap; whose intentionality, educational philosophy, and love for the students he served allowed him to become an effective leader and lasting name in the city of Evanston.

This summer I had the privilege of working to process a collection that memorialized a man and family who gave so much to the Evanston community. Alongside the Joseph Hill collection, the Camelia Hill and Hill Family collections all work to reflect the larger national shift toward integration from the micro lens and tell a story of the impact of homegrown leadership.

Outside of its content, preparing these collections taught me much about the preservation of histories in general. I gained insight and hands-on knowledge about the process, from acquisition and organization to record keeping and storage. I learned what it takes to build and share networks of communal knowledge that can be used to educate the community.

Out of everything I gained from my experience, the most important thing I learned is that we do nothing alone. Whether it’s integrating an elementary school or building a legacy center for the community, I’ve learned this summer how the power of collective action positively effects the shared spaces we call home, and the memories, relationships, and webs of connection that define it.

“Being a product of the community and a part of it for so long, I have a fervent desire to improve it, real faith and pride in Evanston” -J. Hill (6)

*Photo #1 provided by Shorefront Legacy Center. All other photos provided by Raven Morris.

*References are located in Box 1 & 4 of the Joseph E. Hill Collection at Shorefront Legacy Center:

Some Thoughts on Reparations