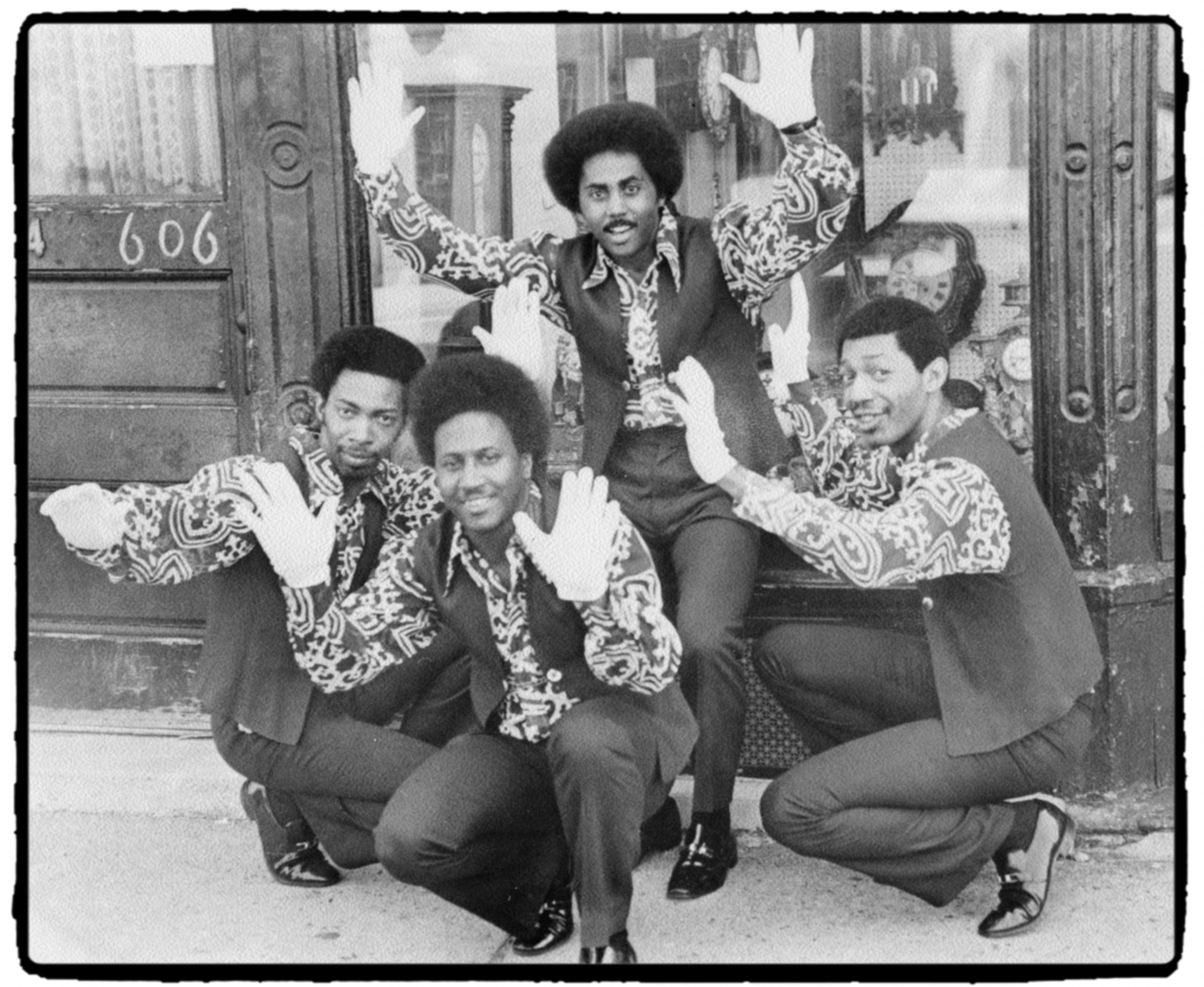 Four men with aspirations to join the ranks of the many singing groups, made their stamp in history in a venue that was far from the music industry, in sponsoring a beauty pageant.

Four Evanston Township High School friends, Billy Giles, Bob Caldwell, Barry Young and Lenard Perkins shared in their interest in singing. After Giles and Caldwell served in the army, they formed a singing group known as the Devotions in 1967. One day, while the group was walking down Dempster Street, they stopped in front of a clock store. Inspired by the display, the group changed their name to the Hands of Time.

For the next several years, the group performed in local and Chicago metro area clubs and venues. Because of obligations to work and raising families, the group never devoted the time and energy needed to go further. “After many performances, we came out of it with $200, split between the four of us”, Mr. Young shared.

The Hands of Time performed at the former 1623 Club, Bobby Jones Club, venues in Chicago. The group also organized a singing venue at the former Student Lounge once located on Church Street and Maple Avenue. The headliner for the event Sonji Clay, the then ex-wife of the late Muhammad Ali.

It was at one venue in Chicago where the group came upon a request to sponsor a pageant. It was early 1971 after performing during a womans’ “society” club event where the group was approached and asked if they may be interested in sponsoring a competition in the North Shore. The winner of the pageant would then compete in the Miss Black Illinois pageant, then from there, advancing to Miss Black America pageant to be held in New York.

The Hands of Time took on the task, and they only had less than six months to pull it off. Under the name H.O.T. Production, short for their group name, they passed out flyers to Northwestern University Students, Evanston Township High School, and National Teacher College.

“The ladies group gave us the information of what criteria was needed for the ladies. They had to be in high school or college and from this area only. And they had to be under 21.” Said Mr. Young.

Throughout the coming months, the young ladies had an instructor that guided them in form, presentation and pageant venues. Eleanor Frazier, who for years had been working with the NorShore 12 cotillions, also helped in the process. Sponsors came from the Student union, the Foster Club and the 1623 Club and the final event was held on July 25, 1971 at the Orrington Hotel in downtown Evanston.

The events formal program, like most pageants, consisted of Music from Fred Hunter Jr. and his Orchestra, the opening procession of contestants, evening gown and swimsuit review and performance by the Hands of Time.

The event was documented in multiple issues of the Chicago Daily Defender, the North Shore Examiner, the Evanston Review, Chicago Tribune and the CCC Newsette. The CCC was quite excited about the event: “. . .Never before has Evanston seen such a spine-chilling event as the H.O.T. Productions’ Miss Black Evanston Beauty Pageant. Judges simply had to be hard-put to decide on the winners. So diversified were their presentations that judges would have been justified in selecting any one of them.
We Learned that by a very narrow margin, . . . they announced to the suspense-filled audience of 300 or more patrons that the lovely Joyce Ashmore was their choice for Miss Black Evanston of 1971.”

Miss. Ashmore, a student at Emerson College, would go on to compete at the Miss Black Illinois that would be held the following month at the Playboy Towers. There she would finish as second runner up to a contestant from Chicago, Illinois. Miss Ashmore, an aspiring poet read one of her piece during the Evanston event entitled “The Black Woman’s Struggle to Adapt to the Changing Realities of Being Black”, with the ending verses:

My character has been molded to fit the survival needs of my people.
So I will change once again to fit their needs.
Mine will be a role of continual change, ever growing with my people,
Assisting them on their way, rather than becoming a stagnant burden.
So, too, must the Black man change.
We both must re-examine and re-define our roles,
For WE have a commitment for the future.
—Joyce Ashford

Though the event was a successful event, in the end, the Miss Black Evanston Pageant would be its first and last pageant from H.O.T. Productions. As Mr. Young simply stated, “We had the best event that year, among the other groups. But for some reason, we were not invited to participate the following year. That ended the effort. . .”. The Hands of Time continued to perform from time to time after the pageant. However, today it is just a memory left back at that time to be replaced with family and careers. There were only a few home recordings of the group, but none exist today.