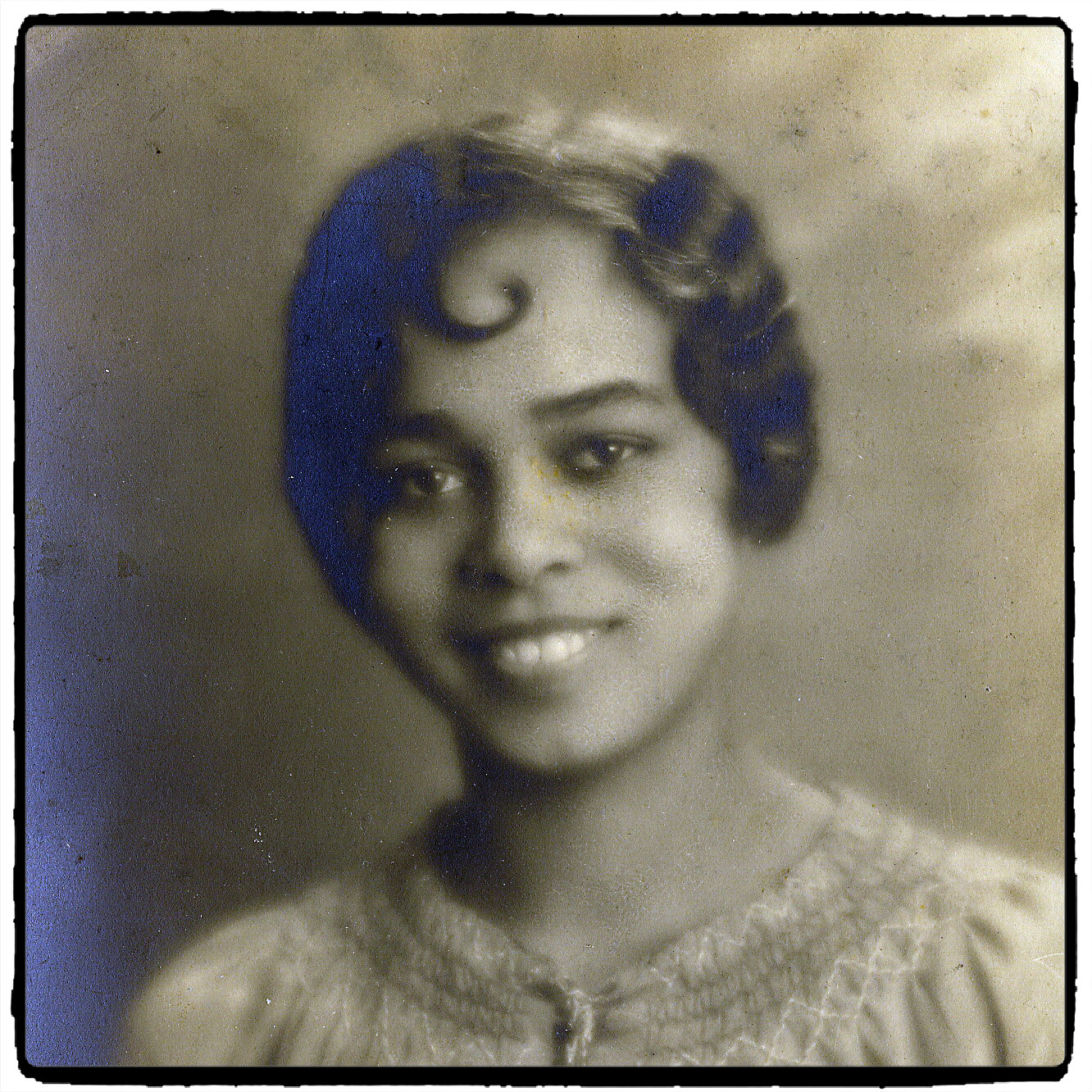 She had begun her life in Warrenton, Georgia. November 4, 1909, the only child of Rosa English and Joseph Hardwick, and moved with her family to Evanston when she was six. She attended the Evanston public schools, sang in the choir at Ebenezer AME Church where her father was a trustee and her mother was founder of several clubs. Following her graduation from Evanston Township High School, she entered Fisk University in Nashville, Tenn. 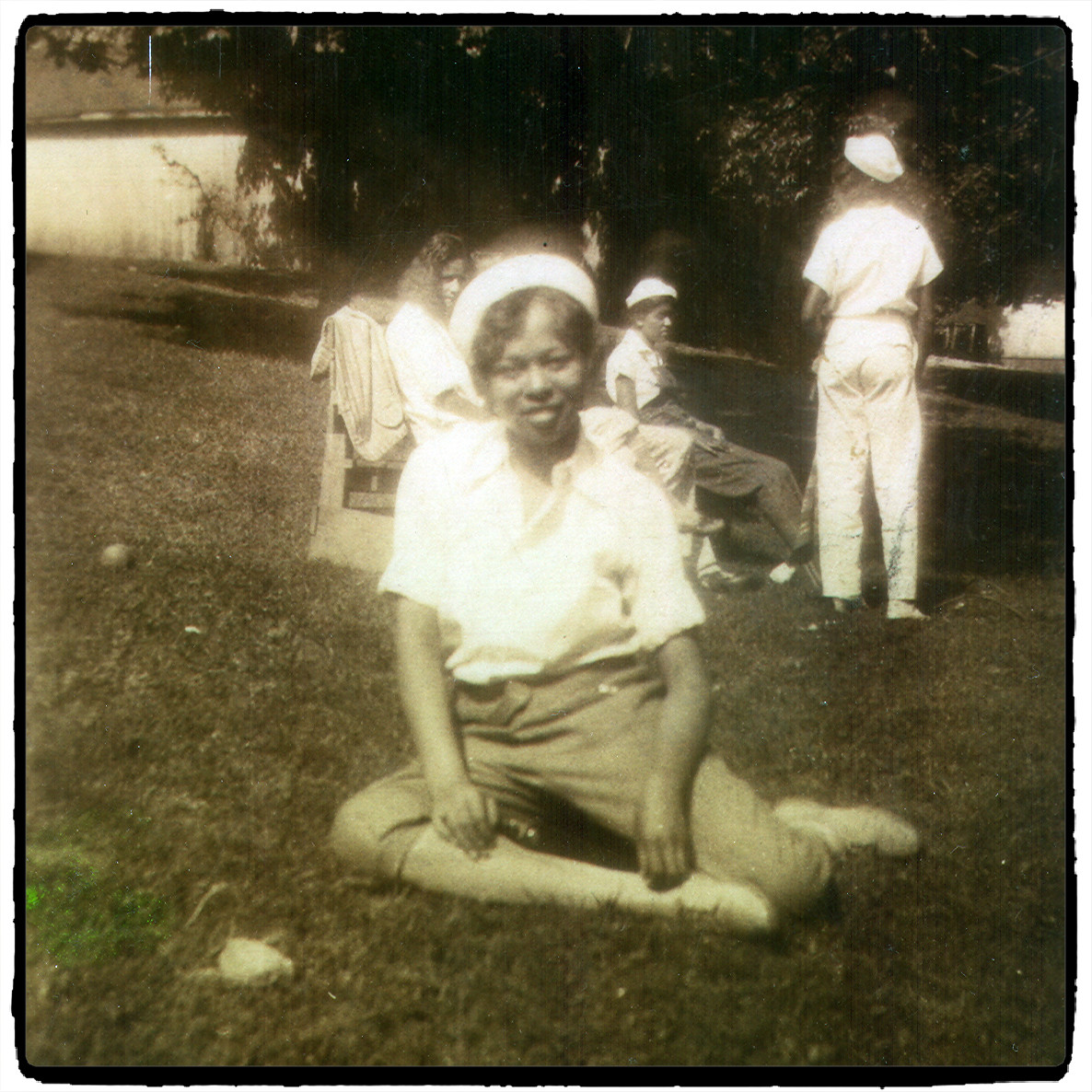 She was proud and pretty, vivacious and spunky, intelligent, loving, generous, charming, and witty. Her friends in Evanston called her “Sandy.” Her classmates at Fisk University called her “Imp.” When she was sixteen, she fell in love with Edwin Bush Jourdain Jr., a fierce crusader for racial justice who would become Evanston’s first black alderman, and was still in love with him more than fifty years later when he died. She had four children, adored each of them, and talked about them all the time.

She loved life and people. She loved babies, everybody’s babies. She loved beauty and art and music. Above all, she loved singing, and with her lyric soprano voice, she became a member of the internationally known Fisk Jubilee Singers.

People knew her by her walk: little bit classical, a little bit jazzy, a little bit cool. She had fabulous legs and loved high-heeled shoes and, when as a teenager, I asked her how she could “walk for hours in those things,” she always laughed and repeated one of her mantras, “Beauty knows no pain.” When she was a teenager, she wanted to sing professionally and maybe become a dancer. Instead, she took care of three generations of her family and never complained. She had grace, and grace under pressure. Her name was Emmaline Hardwick Jourdain.

When I was a young girl, she always prefaced her opinions or information-sharing with ‘Gint’ – my father’s nickname– ‘says.’ While I was trying to grow-up as fast as possible, she loved saying ‘Gint’, he always has five children, meaning me, my three siblings and herself. If anything arose that needed solving, or punishment, she said, “Wait till your father comes home.” Mom declared she was “twenty-nine.” until I was about sixteen and told her that was becoming an embarrassment to me, that she have had to be twelve or thirteen when I was born. Laughing she said, “I’ll be thirty on my next birthday.”

I adored my father, but Mom put the warm, sunny glow in our lives. I was thinking the other day about the up-coming holidays, remembering that when I was a girl, Daddy was Santa Claus, many years transforming our rec-room and the basement corridor that led to it into a pine-bough fairyland. But Mom was always the spirit of Christmas, with holly pinned in hair. 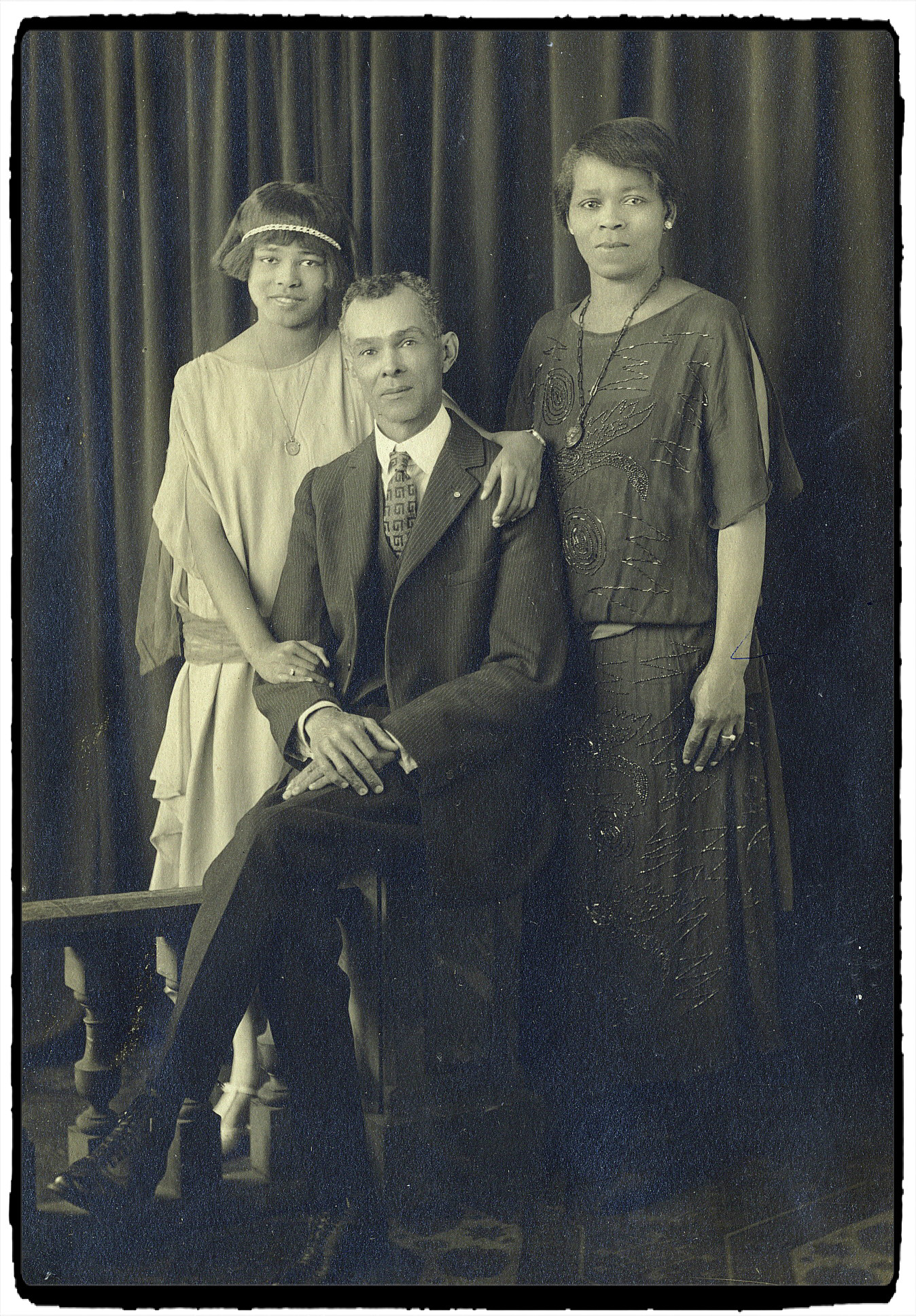 Mr. DuBois, I’ve been reading The Souls of Black Folk and…

She loved our home and the beautiful pieces in it. Except for the times she wanted to go to the Club Delisa to hear Billy Ekstine, or the Rhumboogie to hear Sarah Vaughn, or to Ravinnia Park to hear the Chicago Symphony Orchestra, or to an elegant dinner party for the great tap dancer Bojangles, when I was a girl and dreaming of being off to Paris or Rome, the only other places that I knew that she wanted to go were to the movies with my father or to luncheons or small parties at the homes of friends. Friends whose phone calls or rings at the door she always answered with a delighted, “Hey,” as though she were receiving an unexpected present. She enjoyed company and setting an elegant table when dignitaries came to visit.

Although my father encouraged the participation of his children in these dinner table conversations, Mom rarely said anything. I thought Daddy’s friends thought her delightful, gracious, charming, a great cook and a lovely table decoration. However, over time, I noticed that she was taking much keener interest in what was being said.

Then one night after learning that W.E.B. DuBois, my father’s all-time hero, was again coming to dinner, I saw her in the living room reading. I asked about the book in her hand and she told me it was The Souls of Black Folk. I stared at her and then forgot it.

DuBois did not engage in small talk, nor was he a flatterer, and none of us kids dared intrude more than a sentence into his formidable intellectual zone. But then, after dinner, while we were having desert, Mom leaned a bit over the table, saying quietly, “Mr. DuBois, I’ve been reading The Souls of Black Folk and…”

I don’t remember the rest of her statement. In fact, I think I was too shocked to hear it. Daddy’s head had shot up and he was staring at Mom as though he had never seen her before. But DuBois had heard and was seriously considering what she had said, turning his attention full on Mom and speaking to her in exactly the same manner in which he spoke to Daddy. I sat spellbound, not by DuBois, but by Mom.

Another time sharply etched on my memory is coming home after my first year in college and being beckoned by her into the kitchen. “Nomie, [my nickname] guess what?”, she began. Her eyes were sparkling. “I have a job. It begins next week.” I stared. Mom with a Job? Although over the years, she had frequently told my father that she wanted a job, he had always said that she belonged at home with the children.

“What are you going to do?” I asked cautiously,

“I’m going to work in the payroll department at Great Lakes Naval station.”

I gasped. Mom had never paid a single bill and, except for the time Daddy had worked in Washington, she’d never even bought groceries. She had never had a checkbook and Daddy either took her or gave her cash whenever she bought clothes.

“Mom, what are you going to do there?”

“Neither could you before you learned how,” she replied.

But soon, Mother found more things she could do. She began writing articles for her department’s bi-monthly newsletter – witty, intriguing pieces – that had personnel writing notes thanking her for the articles.

Then she was asked to write and edit the newsletter. She brought every one home proudly showing me the words on the mast head. “Emmaline Jourdain, Editor”.

After Wif [my daughter’s nick name] finished grade school, she and I moved back east, not to New York, but to Washington where my brother, Spence was then living. After my father died, Mom began visiting me twice a year: a month at Christmas and two or three weeks in the summer. She loved singing along with my CD’s, still loved theater, the ballet and musicals, and we went as often as I could afford, several times going up to New York to see a Broadway show which always thrilled her. And for one night she was a star.

I had gotten a ticket for Mom to see a Broadway show which I thought she would love. Spence took her up to New York, but she hated the show, saying to my stunned disbelief that “It was too vulgar,” that she wanted to go to a nightclub. A friend, Emme Kemp, whom I had known since her student days at Northwestern, had become a well-known pianist, appearing at swank and “in” clubs in New York and Europe. She had come to our home several times during our college days and sometimes Mom had sung along with her as she played our piano. She was then playing at a very “in” club just off Broadway. Spence took Mom to see her.

Emme called Mom to the mike. Mom demurred, but Emme insisted. Finally Mom walked to the stage, conferred a few minutes with Emme, then took the mike. She was eighty four, but her voice was still a pure lyric soprano as “Summertime” hushed her audience and, when she finished, brought everyone to their feet, shouting “Bravo.” At their applauding insistence, she gave them another song and then another before going back to her table where, to her amazement, several from the audience crowded around her, asking who she was, why they had not heard of her before.

Emme called me as soon as she got home and told me every detail of what had happened. When Mom got back to Washington the next afternoon, I told her I had heard that she had been singing in a nightclub on Broadway. Her face was radiant. “Oh, Nomie,” she said. “It was so wonderful.” 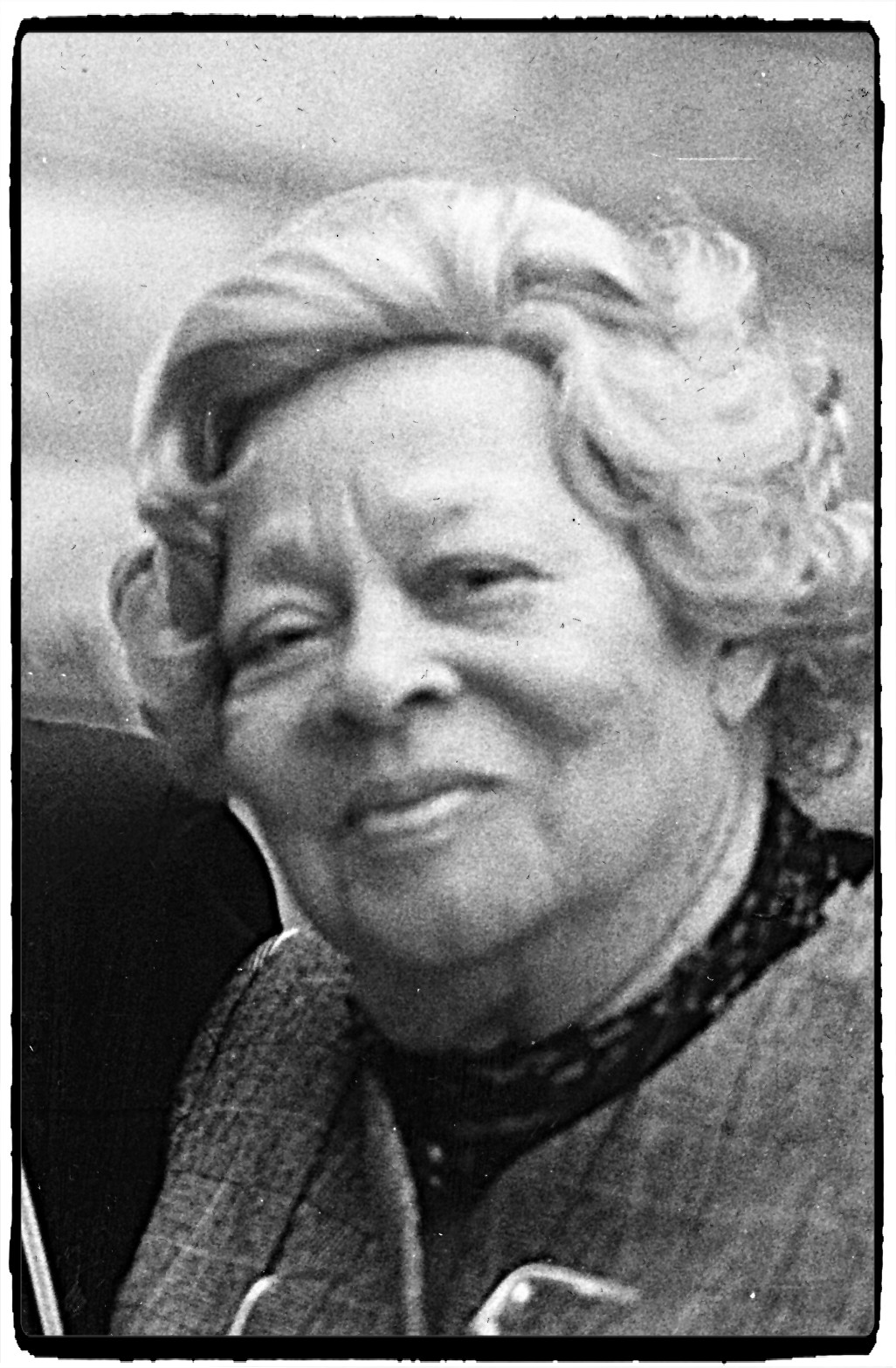 That would be my mother’s last trip to New York, to Washington; the last time she would leave Evanston. Within a year, my brother, Bud. called me asking to me to come home and help take care of her.

Years before, both Buddy and I had, separately, promised Mother we would never put her in a nursing home. And though at the time I believe neither of us thought such a time would ever come, it was a promise we were both determined to keep. I came home and, with the help of a part time care-giver, especially Nita Davis, I was with Mom for nearly seven years. She became paralyzed and almost blind, but even as her descent into Alzheimer’s deepened, her spirit never waned. Buddy got up twice every night to turn her with such surgical precision that she never had a bed sore. I made up singing games to play with her, and though I can’t carry a note, she entered into them, cheering me with her delight, inspiring me with her bravery, her spunk and, most of all, with her faith.

In addition to her staunch support of her husband’s career, Emmaline Jourdain was active in many community organizations including: The Hardwick Guild, which was founded by her mother for the young women of Ebenezer AME Church, The Women’s Missionary Society of the church, The Community Hospital Auxiliary, and The Toppers who were active in civic causes. She served as Worthy Matron, Pride of the North, Number 61, Order of the Eastern Star in 1973 and a member of the Board of Stewards of Ebenezer Church.