The Grandmothers. . .My Queens: Laura Belle 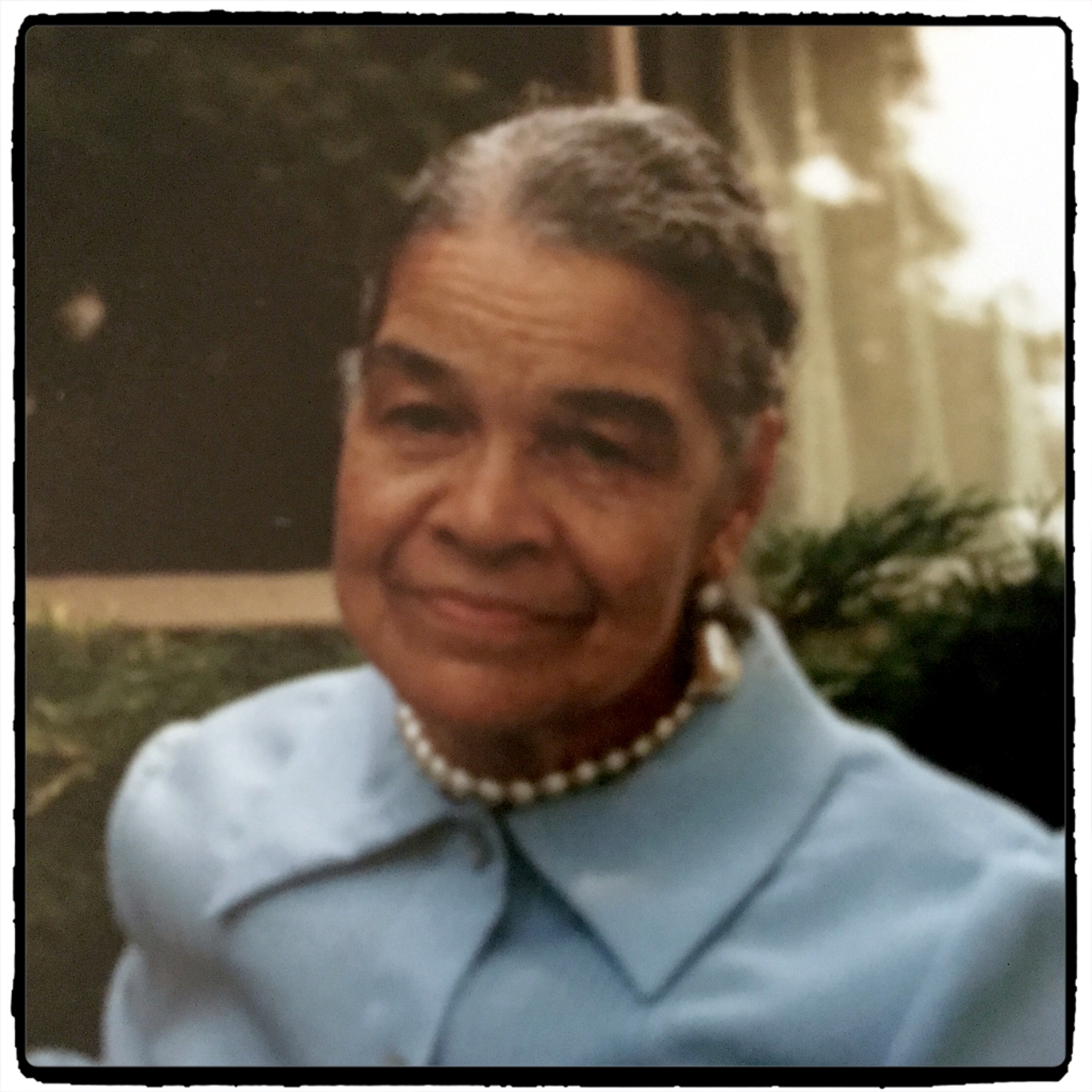 I have been blessed with having a very close and deep relationship with both of my grandmothers.

Laura Eubanks Hadley, born January 9, 1907 in Charlottesville, Virginia, was the daughter of John Eubanks. She never knew her mother and her father was, from all observation, a white man, but legally classified as a Negro because of that one drop of black blood coursing through his veins. John left his daughter in the care of relatives, one of which was her half-sister Ora Castleberry, who would later become an Evanstonian. Laura “Belle” wouldn’t see her father until her late-teens. She traveled to Pennsylvania and spent time with her dad while in route to Illinois to join her sister Ora in Evanston. Growing up as a farm girl, tending chickens, ducks, the garden, and honing the skills she would need later in life by also taking care of the household chores.

Grandma Laura was a short, slightly built, very light-skinned woman with freckles and straight auburn hair. She could neither read nor write, so she had to live by her very gentle spirit, her very humble nature and ability to perform hard work. She was well aware of who she was in society, but never hesitated to do whatever she had to do to better herself and others. She was a devout Christian and lifelong member of Mt. Zion Missionary Baptist Church on Clark Street in Evanston. Her laughter was soft and she offered few opinions.

Arriving in Evanston in late 1927, she did odd housekeeping jobs, sometimes “staying on the place”, as a live-in housekeeper. Soon after she met and married Lawrence Michael Hadley, an Evanston High School graduate, charismatic, dashing and very street wise. Within the first five years of the Depression she bore four children: Norwood, Delores, Nadine and Peter.

Grandma Laura struggled against amazing odds; those of our racially troubled society, with great poverty and few skills to overcome it, in addition to a troubled and dysfunctional marriage. Despite it all, she never uttered a bad word against anyone. In fact, she would cease to talk when the conversation became negative and driven by deprecating gossip. If you came to her with negativity, she would, without hesitation, say, “Don’t come tome with that he said, she said, who shot John!” All got the message.

It is from my Grandma Laura that I was gifted with oral history. Her memory was phenomenal, many times down to the day and most times even remembering what the weather was on any given past event.

If the truth be told, I think all people have their favorites, even parents and grandparents. It was apparent who her favorite grand boys were. I was not one of them, but I NEVER felt slighted in anyway. Her love was that great and complete.

Grandma Laura had an intense love for gambling, particularly “the horses”. Her off days from “the place”, she and her friend and companion Roosevelt Reeves, aka “Toby”, would take us to Arlington Racetrack to the north and Washington Park to the south. Sportsman’s “trotters” were their least favorite, but would fill the need for enjoyment many evenings. The experience was one that has given me smiles and personal laughs to this day. I would watch with great joy at the gestures and animated conversation, as she and Toby would pick and choose the day’s winners. On those days when they would win “big”, the ride home was full of laughter, songs and ice cream cones.

On our family trips to Pennsylvania to visit her dad, whom she doted over with great pride and pleasure, she would show us the point where the Allegheny and the Monongahela rivers merged behind her dad’s tiny house. I would watch with wonder and listen, mesmerized, to her dad and his many tall tales. The one that has stuck with me all my life was the story about his coming to Pennsylvania from Virginia.

He, in a drunken brawl, killed a man and ran up into the hills surrounding McKeesport, PA to escape the law. On the road up into the hills, he was met by the constable who asked him if he knew of a man called John Eubanks. My great-grandfather replied, “Oh yeah, I know that ole nigga, he’s down the mountain.” Knowing that “John Eubanks” was classified a black man and him looking like a white man, he used this ruse to make his escape. My great-grandfather was eventually caught and served out his time on the chain gang and lived out his life without further trouble with the law.

My grandmother, most of my life, went to night school at ETHS to learn to read and write. I remember her great excitement upon being admitted to night school when I was in the second grade. Despite the fact that she always had two jobs and many times three and four, she would never miss school on an evening she was not working. Her great desire to learn was apparent because she would forgo the night races in order to go to night school. But, know this . . . thanks to the local bookie at Jack Pass’s store on Church Street, she was able to get her bet in and still go to school.

Many, many years later, she called me with great excitement and joy in her voice. She was then living at Ebenezer Primm Towers and I lived across the alley on Garnett Place. She told me to come quick because it was very important. I ran across the alley to meet her at the back door. She took me into her apartment and asked me to sit. She went to her room and brought out her checkbook. I thought she wanted me to write out a check for her, something I had been doing for many years. Instead, she sat down with pen in hand and began to slowly write the needed words on her check. Finished she beam with great pride. I cried with joy and we celebrated with her favorite . . . a cup of extremely strong black coffee.

Years after that, I graduated from college. My grandmother was sitting on the couch when we arrived at my dad’s for the graduation dinner. . . which I was tricked into cooking. As I entered and gave her my obligatory hug and kiss, she handed me a ballpoint pen with a congratulations card. I said thanks and read the card. I said thanks again and was about to move to greet others when she asked me, “Brucie, do you know why I gave you a pen?” I told her that I figured it was because I had graduated. She said, “Yes Brucie, but more importantly, you can read and write and because you can, you should always carry a pen with you”.

Grandma Laura’s love was shared with countless Evanstonians of all ages, races and socio-economic status. She would introduce herself to those she shared bus rides with, telling them proudly of her “boys”, Roy Jr., Bruce, Dion, Brian King and Joel Hadley.

Of all of my relatives and loved ones who have passed on, Grandma Laura has been the closest to an angel I’ve yet to meet. I am truly the better for all of my encounters and circumstances in life, because of her.