An Unassuming Place: My Internship Experience at the Shorefront Legacy Center 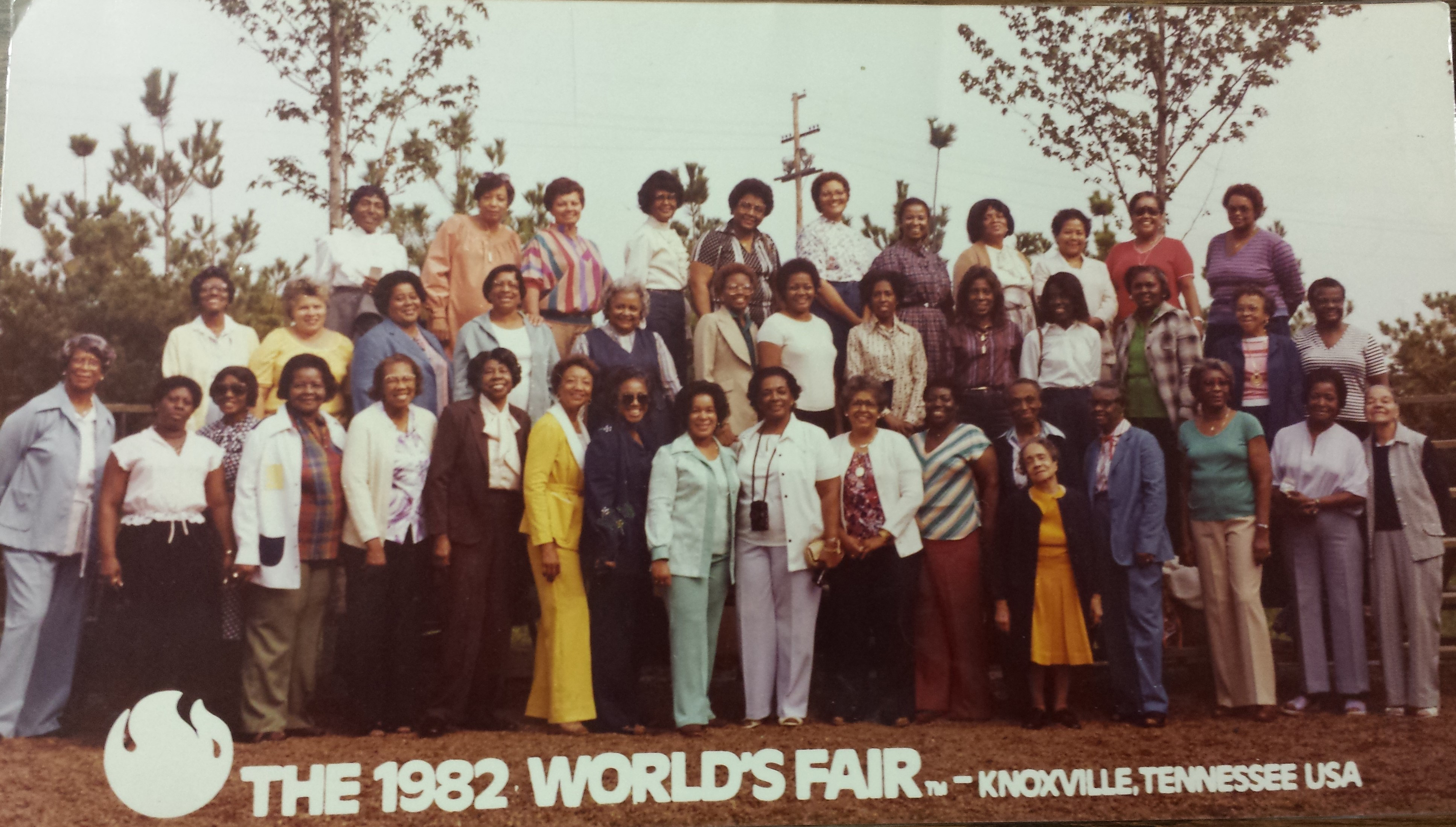 Pyramid Club members on one of their many outings, 1982

Pyramid Club members on one of their many outings, 1982

I can’t recall just what I expected to happen when I, an LIS graduate student with no prior archival experience (and admittedly, a vivid imagination), walked inside the Shorefront Legacy Center: the sound of the heavens opening? Angelic choirs singing the Hallelujah Chorus and precious collections bathed in rays of sunlight? Granted, the Center is located on the lower level of the Sherman United Methodist Church in Evanston, Illinois, and I do tend to view archives as somewhat wondrous places containing fascinating history; however, I discovered that the wonder I anticipated was actually to be found within the collection of materials that I processed this semester.

Almost three years ago when I started down the path toward earning my MLIS, I was utterly convinced that my career would focus on knowledge management (KM). But the Shorefront Legacy Center and my internship experience have since broadened my perspective and given me a stronger sense of where my interests and strengths might actually lie. I’ve been pleasantly surprised to realize that I may have found that ever elusive “fit” and sense of belonging that I’ve sought within this professional community to which I’m drawn.

One of the first tasks was to select a collection as a focus for my internship. One might think it’s as simple as choosing which collection presents the most interesting topical matter, or accepting the challenge of diving into the most complex collection. I can state for the record that as an anxious perfectionist, and one without archival experience at that, the choice was a bit more fraught, shall we say. I’ll spare you my torturous inner dialogue and quickly confess that I selected The Pyramid Social and Civic Club Collection. Founded in 1974 and active until 2009, the Pyramid Social and Civic Club hosted civic events for community members such as its salad luncheon, holiday dinner for the residents of the Ebenezer Primm Towers, and Spring Fling Dinner. And during its 35-year existence, Club members enjoyed annual social events such as bus tours and cruises to exotic locales. 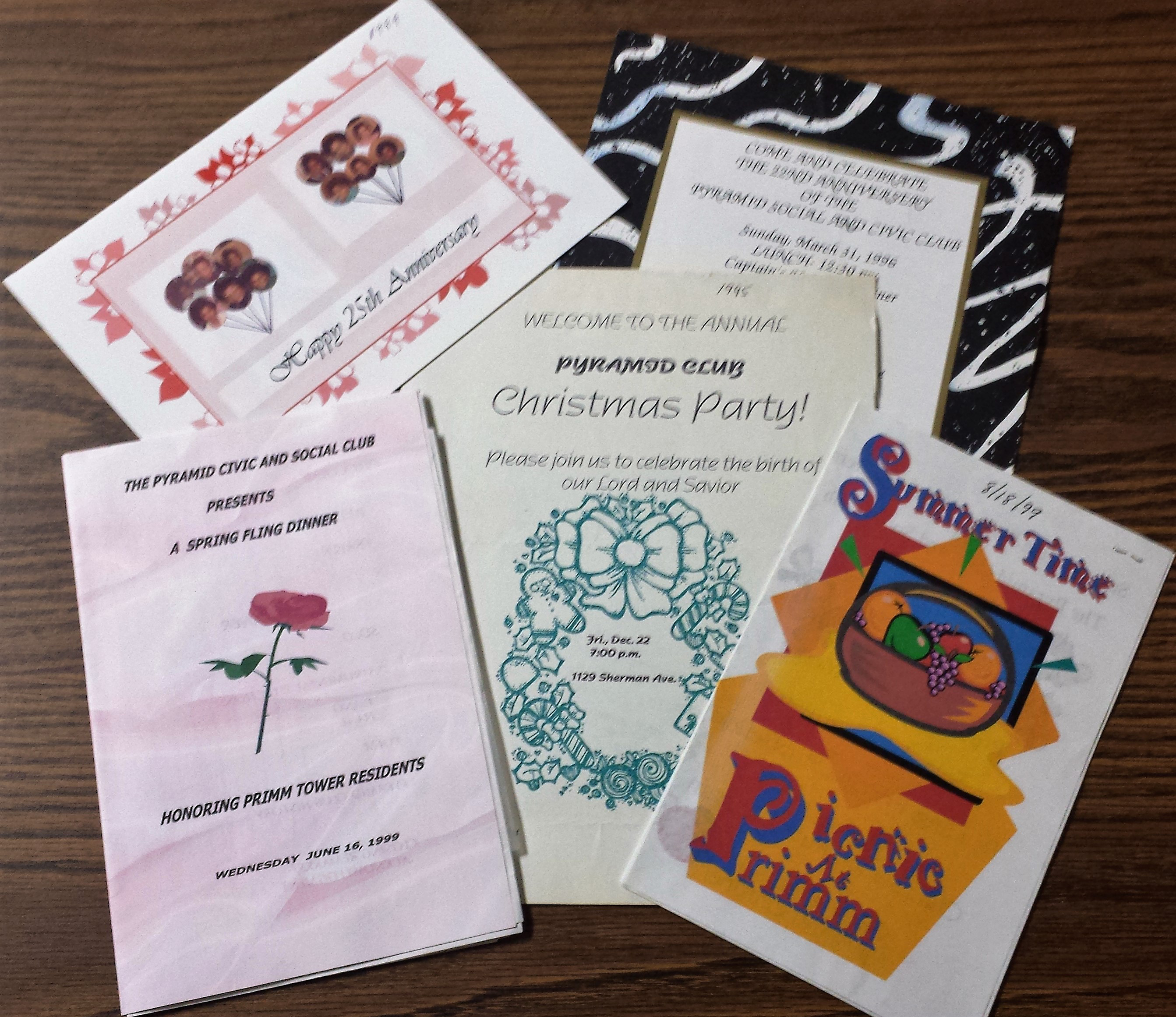 Samples of programs and events

I began by unpacking and inventorying the collection materials, marveling at how 35 years’ worth of memories could be contained so neatly in one box. Four photo albums, some loose photos, and a manila folder. I would be responsible for organizing this content, making it accessible to future researchers, and ensuring that it represented the history of this club in a way befitting its legacy.

Over the next several weeks, I worked my way through the box, emptying one album at a time, carefully peeling back the plastic covers from the photos that were stuck to photo album sheets; sorting each club event’s memorabilia into its own pile on the processing table. In quiet moments, I gradually began to notice how the shape of the collection wasn’t the only thing shifting – I was changing too. I began to view the Center as a refuge. I would enter, feeling more energetic than I had in days, excited and ready to take on a day’s new work. My body would automatically sigh with relief as I shook off the layers of the previous week’s stress, and my mind would clear as I began to work through the list of tasks before me, mapping out next steps.

The Pyramid Club. . . decades of close friendship and laughter 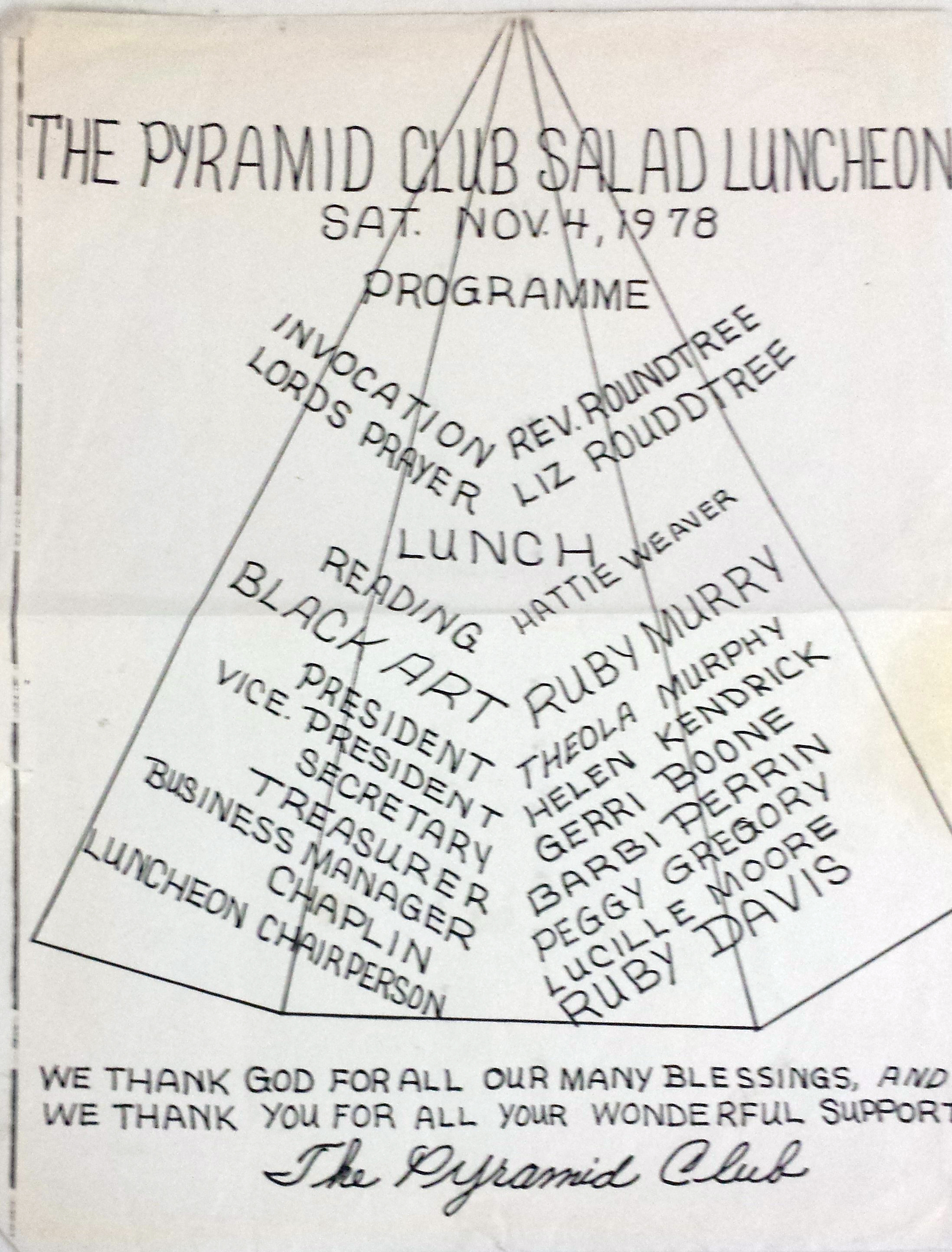 One evening, I began processing the fourth and final photo album of materials. Within its pages, I noticed the funeral program for one of the members. As I continued disassembling the contents of the album, I discovered another program, and another, and another, until it occurred to me that this was the album – the album containing funeral programs and death notices for all of the club members. I remember feeling unusually emotional, trying to surreptitiously wipe away tears. I found it difficult to reconcile how much loss I felt at the passing of women I didn’t even know, feeling inexplicably as though I’d somehow lost dear friends. In processing this collection, this history of friendships spanning 35 years, I found that faces had become familiar to me, naming those in photos became second nature, and smiles had stayed the same throughout the decades.

Was I grieving the loss of these women, or was it tinged with something more? Was I affected by the impending end of both my internship and the processing this collection? Do all archivists experience this level of emotional attachment to a particular collection at some point during their career? Am I a singular hopeless case because of my sappiness? I’d like to think that my sensitivity bodes well for a future as a particularly intuitive and intentional archivist; on the other hand, chances are equally high that I may just make a lousy archivist because I’d quickly become known as “the woman who cries every time she processes pictures of people”! 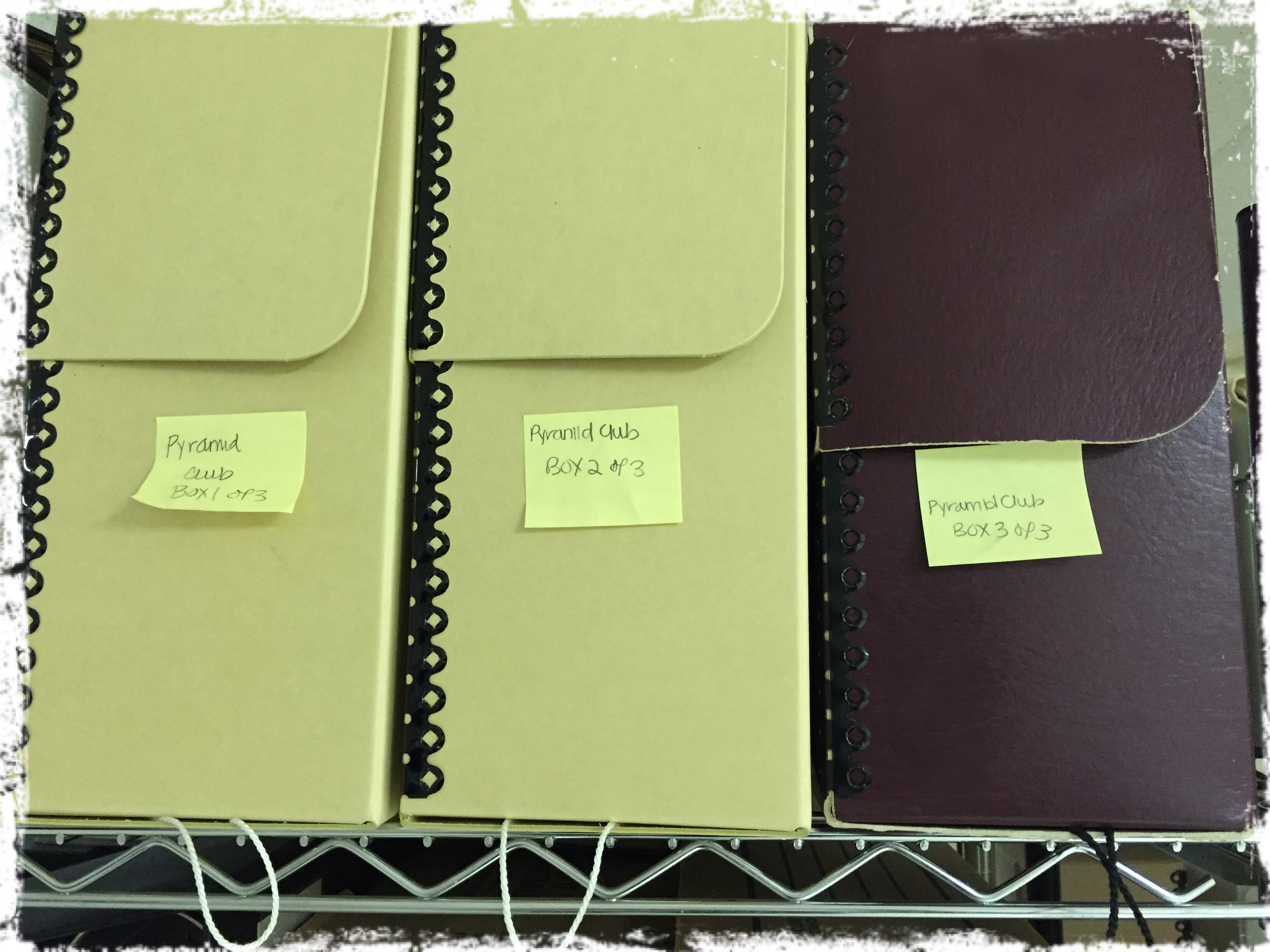 I spent the last two weeks of my internship labeling folders carefully and consistently, filing materials in corresponding folders, and storing items in their storage cases. With each folder I completed, I found myself gaining closure, both in processing the Club’s collection, and in completing my internship. I felt that I’d evolved somewhat during my experience – learning a bit more about my professional capacities, about the rich social and civic history of Evanston, and of the enduring legacy of friendships that, if we’re lucky, we might all have the chance to experience.

I am grateful to the members of The Pyramid Club for allowing me a glimpse into their decades of close friendship and laughter, and for the honor of being able to process their collection as my very first archival opportunity. And I remain grateful to the Shorefront Legacy Center for providing a refuge, for allowing me to identify and experience another skillset that I possess, and for not only serving as a keeper of North Shore history, but also for playing an important role in mine.