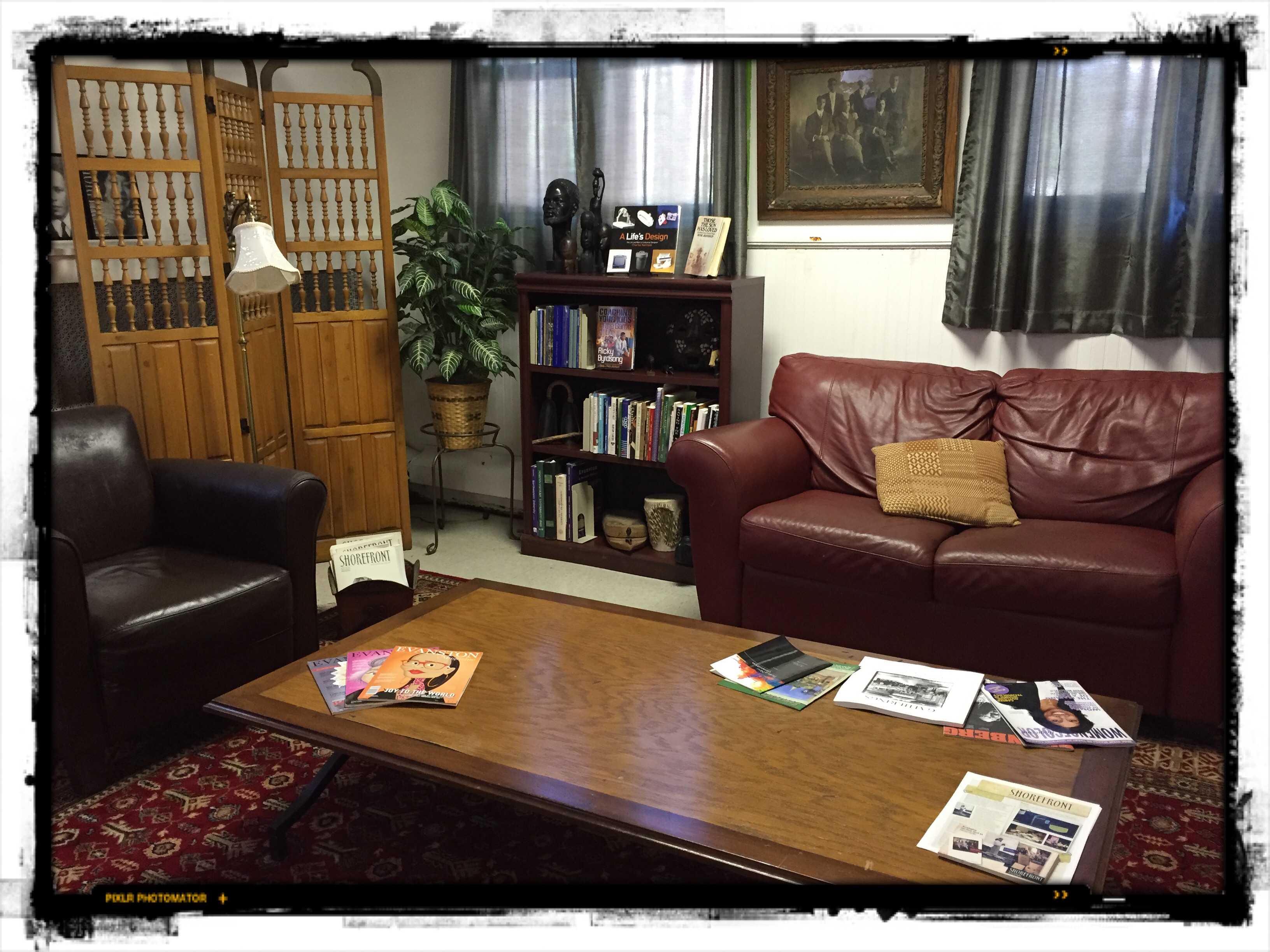 2015 has been a busy year for Shorefront as we have settled into our new home in the lower level of Sherman United Methodist Church, and there are a few more months left in the year. During the year, we have continued to create an inviting facility for visitors, researchers, room for a growing archive, forged new partnerships and received local and national recognitions. 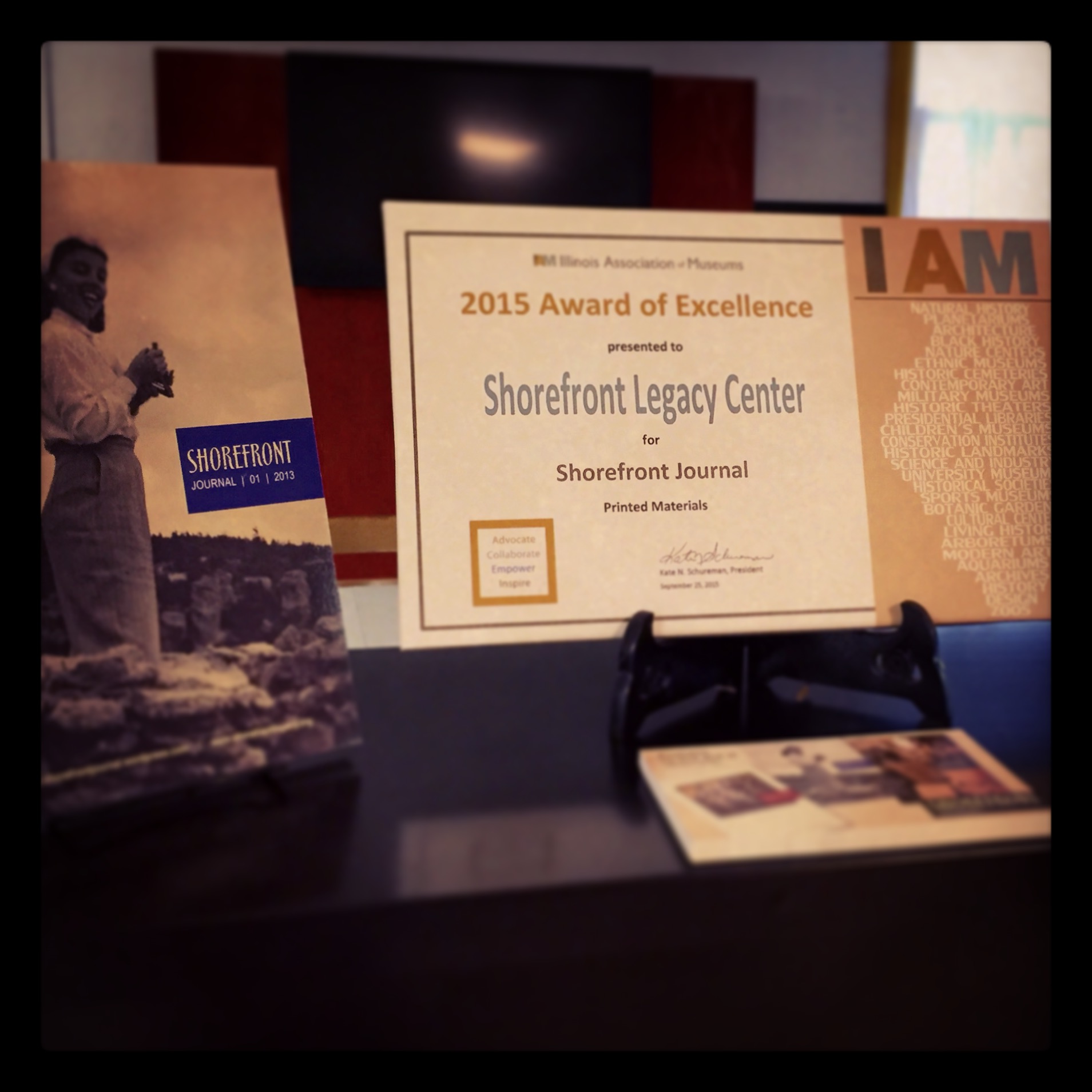 The Society of American Archivists recognized Shorefront with the 2015 Diversity Award for outstanding contributions in advancing diversity within the archives profession, SAA, or the archival record. Shorefront was also the recipient of the 2015 Award of Excellence from the Illinois Association of Museums for our work with the Shorefront Journal.

For the last six years, Shorefront has continued its involvement with the Black Metropolis Research Consortium (BMRC) and as a model “second space” organization for others entities to pattern. Shorefront founder, Dino Robinson, was a keynote presenter at the BMRC 10th Anniversary reception that was held on October 15, 2015. BMRC Fellow, Megan Klein, spent two months at the Legacy Center while working on her research on and about housing patterns and its ties with segregating a school system in Evanston, Illinois. Her work is on-going. 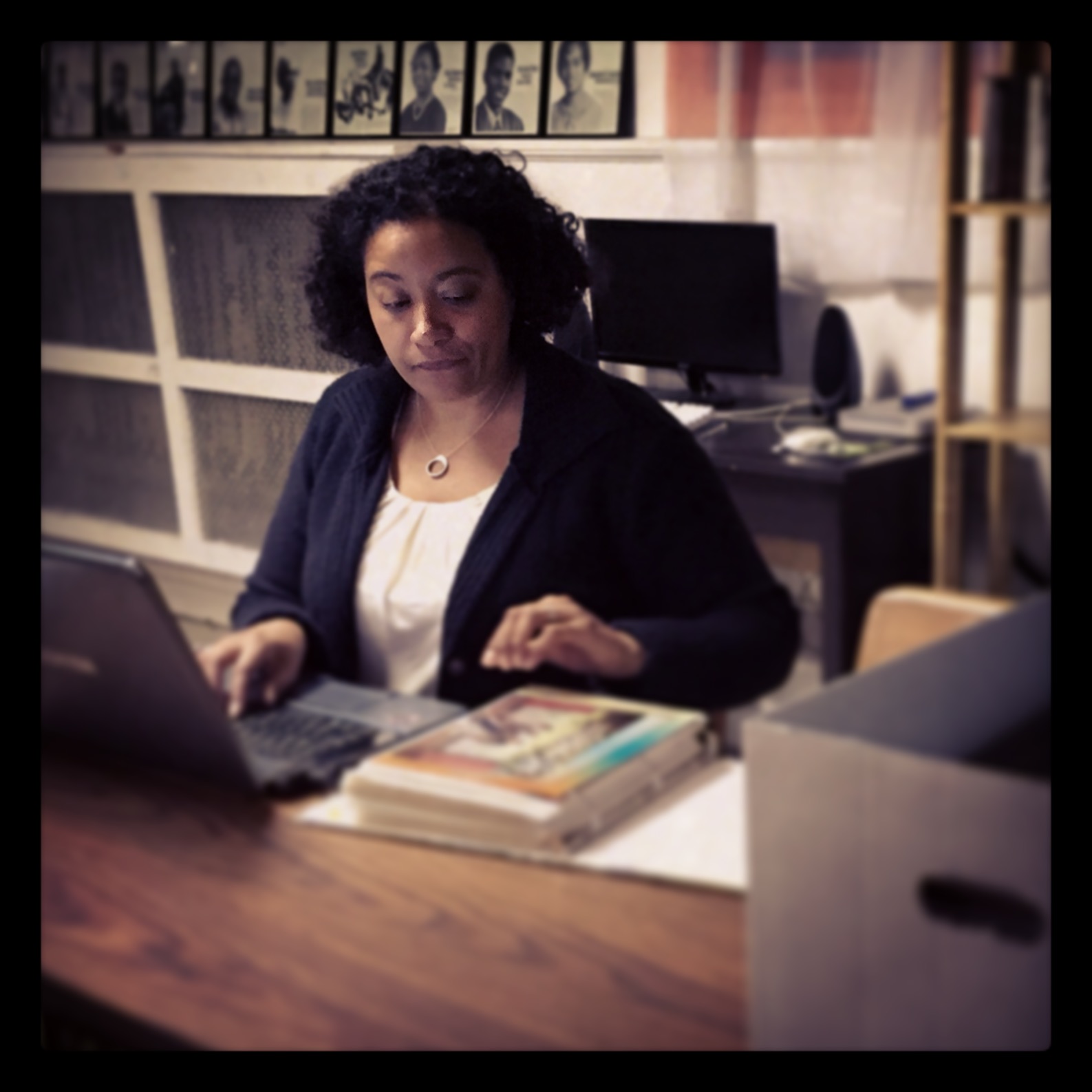 Shorefront also facilitated an intern from Dominican University. Nicole Gibby Munguia fulfilled a 40 hour internship in the last quarter of the year that will result in at least one processed project and one article for publication in Shorefront Journal.

Shorefront’s library of books have been cataloged with the Evanston Public Library in WorldCat and is now searchable. This completes a short-term goal to have our holdings of over 500 titles incorporated with a national and standardized library cataloging service. In addition, Shorefront assisted the City of Evanston in reestablishing the Fleetwood Jourdain Art Guild’s collection for permanent display at the Lorraine H. Morton Civic Center in Evanston.

For the third year, Shorefront, in partnership with Evanston chapter N.A.A.C.P., the African American Genealogy Consortium, and The Haitian Congress to Fortify Haiti, hosted two consecutive lectures that facilitated discussion involving “Black Lives Matter” and “The History of Black Entrepreneurship”. The second lectured launched a Shorefront led presentation on the history of Black-owned businesses in Evanston that was presented at various public gatherings and the installation of a wall exhibit at a newly opened community center. 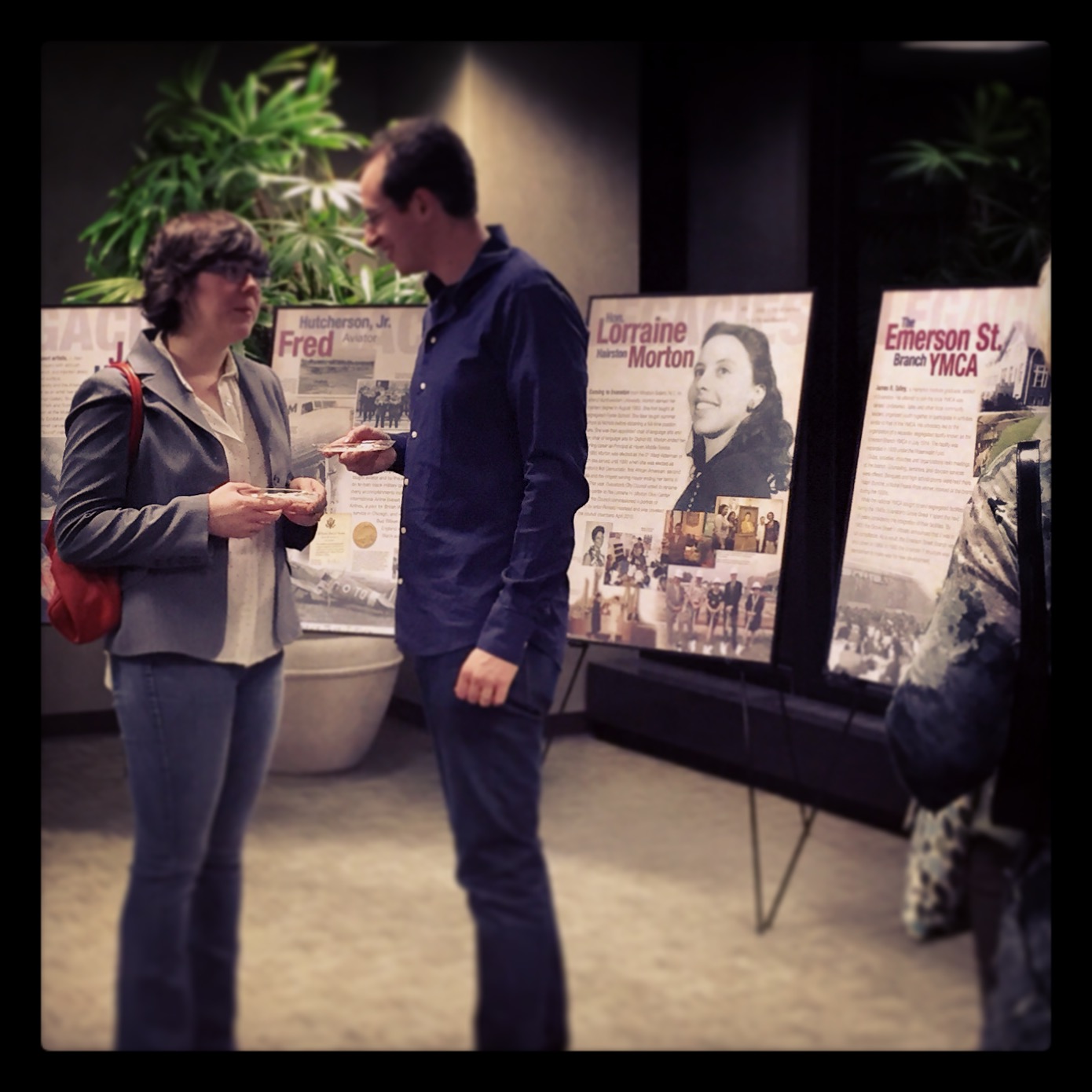 “Legacies” exhibit at the A Bright Night For the Arts event

Shorefront prepared a new traveling exhibit entitled “Legacies”, consisting of several oversized panels showcasing people and organizations. The first series of panels were displayed during the One State conference, a program of the Illinois Arts Alliance and at the A Bright Night For the Arts event. The exhibit will continue to grow and travel to various schools, libraries and other venues.

Shorefront’s resident scholar, Doria Johnson, completed a recent fellow at the Schomburg Center for Research in Black Culture in Harlem New York for a exhibit entitled “Black Suburbia” through end of 2015. Evanston is one of the featured “suburbs” with a large and historic Black community.

Shorefront’s work in launching its publishing arm, utilizing its growing archives as primary sources has grown. Shorefront has identified 15 potential titles, three of which is a three volume series by Spencer Jourdain entitled Dream Dancers that follows the legacies of two families and their eventual migration to Evanston. The reissue of A Place We Can Call Our Home has been widely accepted and several schools have purchased copies for both the student body and teachers. Look for more during the 2016 year.

The online Shorefront Journal has been live since August 2012. To date, the journal has had over 30,000 visits with over 70 posts. In addition, there are three printed annuals available for purchase that combine the articles for that year. The Online and printed journals were recognized by the Illinois Association of Museums with the 2015 Award of Excellence for printed materials. 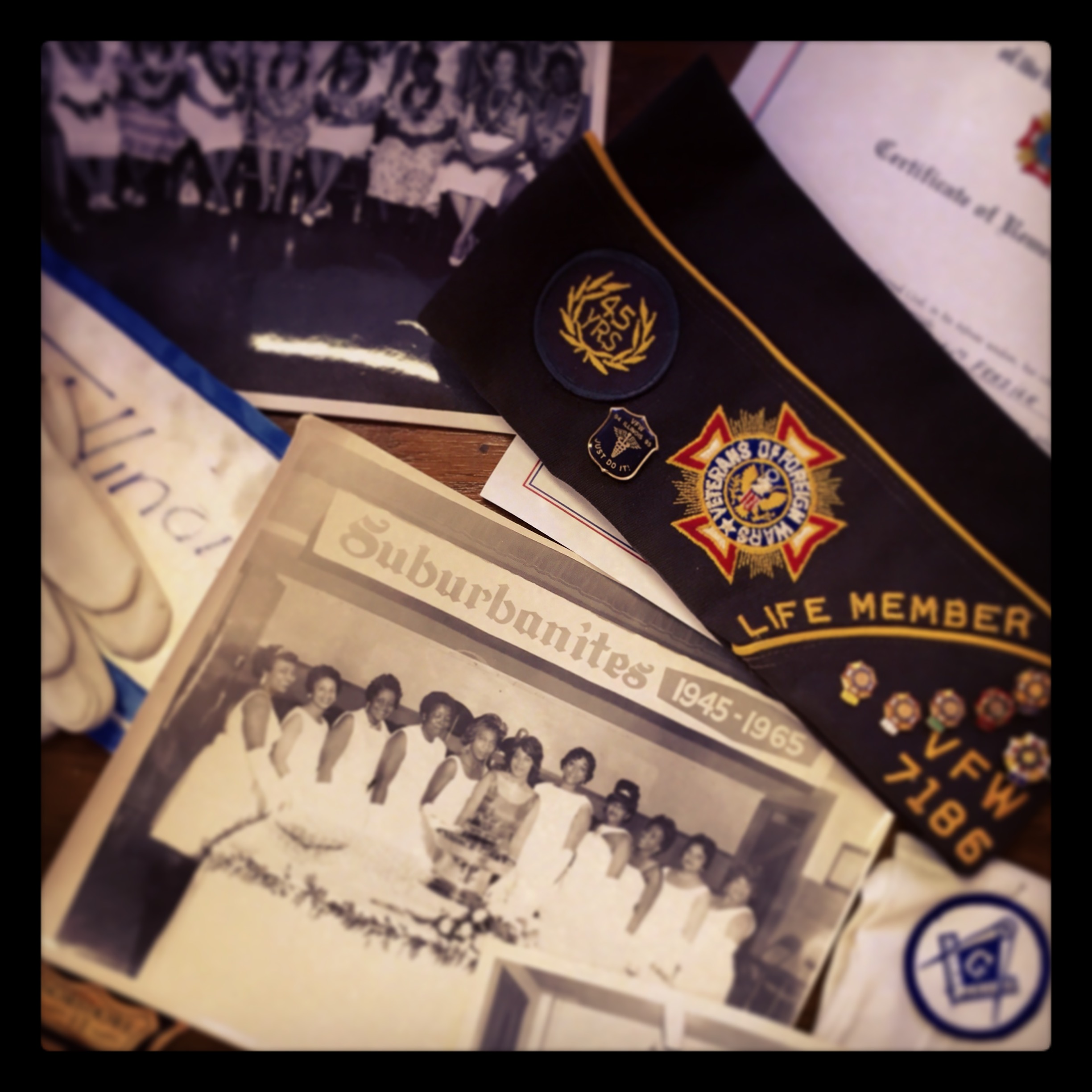 In 2014, we reported a 50% growth of our archives to a little over 100 linear feet. Since then, the holdings have grown to over 175 linear feet— and it is still growing. New collections include the Evanston Neighborhood Conference, North Shore Chapter Jack and Jill, Inc., a significant addition to the Ebenezer A.M.E. Church, Delta Alpha Boulé and North Shore Illinois Chapter of the Links, Inc. archives, and several family archives. 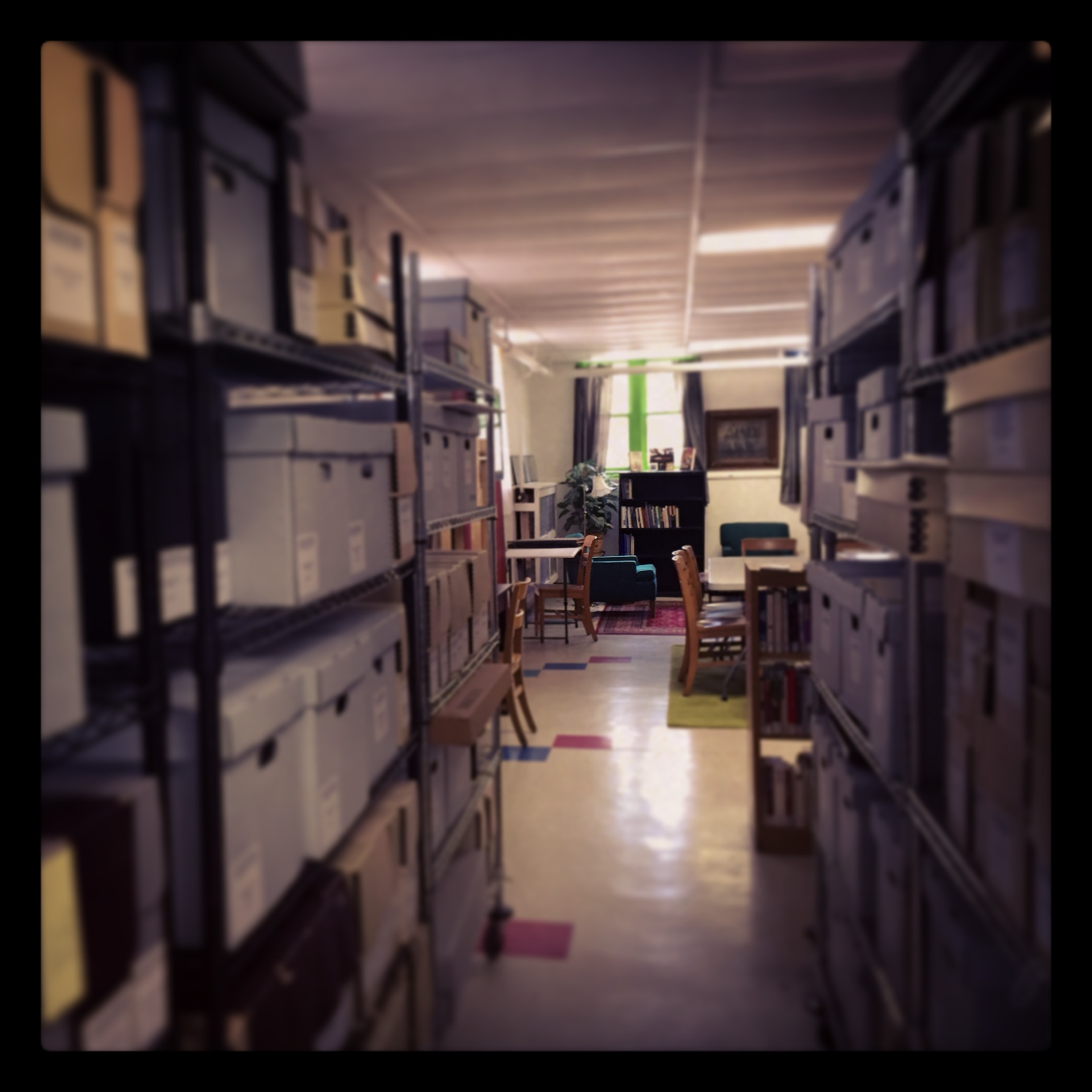 Shorefront owes thanks to Robin Simmons of Signature Construction Services for remodeling work done in the Legacy Center that has added over 300 square feet of storage and public space to accommodate new archives. We also would like to thank Mr. and Mrs. Robinson, Megan Klein, Fran Joy and Toni for furniture file cabinets and artwork that has enhanced the centers work space.

Shorefront has always been a strong advocate for groups with a passion in archiving subject specific items. Earlier in the year, Shorefront partnered with the Modern Dance Music Archives and Research Foundation, providing guidance and space while housing their archives at Shorefront. The organizations focus is on the history of the Chicago House Music Scene with a focus on the work of pioneering DJs and clubs.

Our outreach includes participation in the Chicago Open Archives multi-day events where archivists tour different Chicago area repositories and for school and summer camp tours. Our social media presence continues to capture a growing audience on Facebook, Twitter the online journal and our redesigned website.

Shorefront is a 501(c)(3) nonprofit historical organization dedicated to collecting, preserving and educating people about Black history on Chicago’s suburban North Shore. It is publicly supported through grants, contributions and membership. The Legacy Center is open to the public for research initiatives.