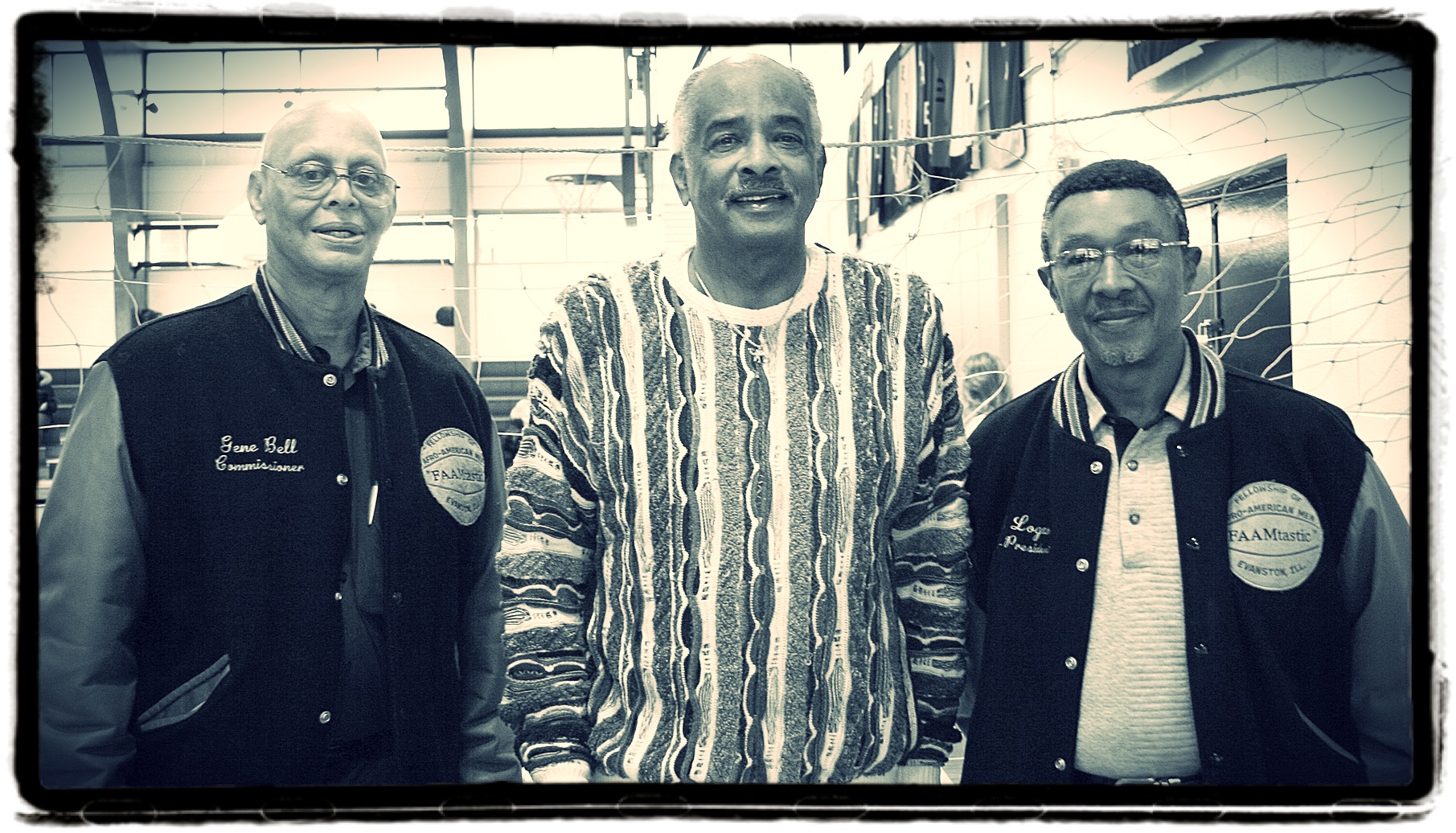 A few good men were all it took to organize, inspire and mentor more than 4,000 youth on the north shore. Ten men got together in 1967 and formed the Fellowship of Afro-American Men (FAAM) to provide a needed outlet for youth in the community when the educational system cut extracurricular activities.

During the late 1960s, and in the midst of civil rights, war and social changes, Evanston was taking steps changing with the times. Some included decisions affecting local youths. The Emerson Street YMCA (a segregated branch) closed its facilities and School District 65 reduced its after-school organized sports programs. Evanston’s African American population in 1970 reached nearly 13,000.

The school budget cuts affected 6th, 7th and 8th grades youths leaving a void for after-school organized sports. Knowing the need for similar activities, a new organization formed around that need and FAAM was born.

“The schools cut back on the after school programs.” Bill Logan said. “There was no more basketball and football, there was nothing going on there.” 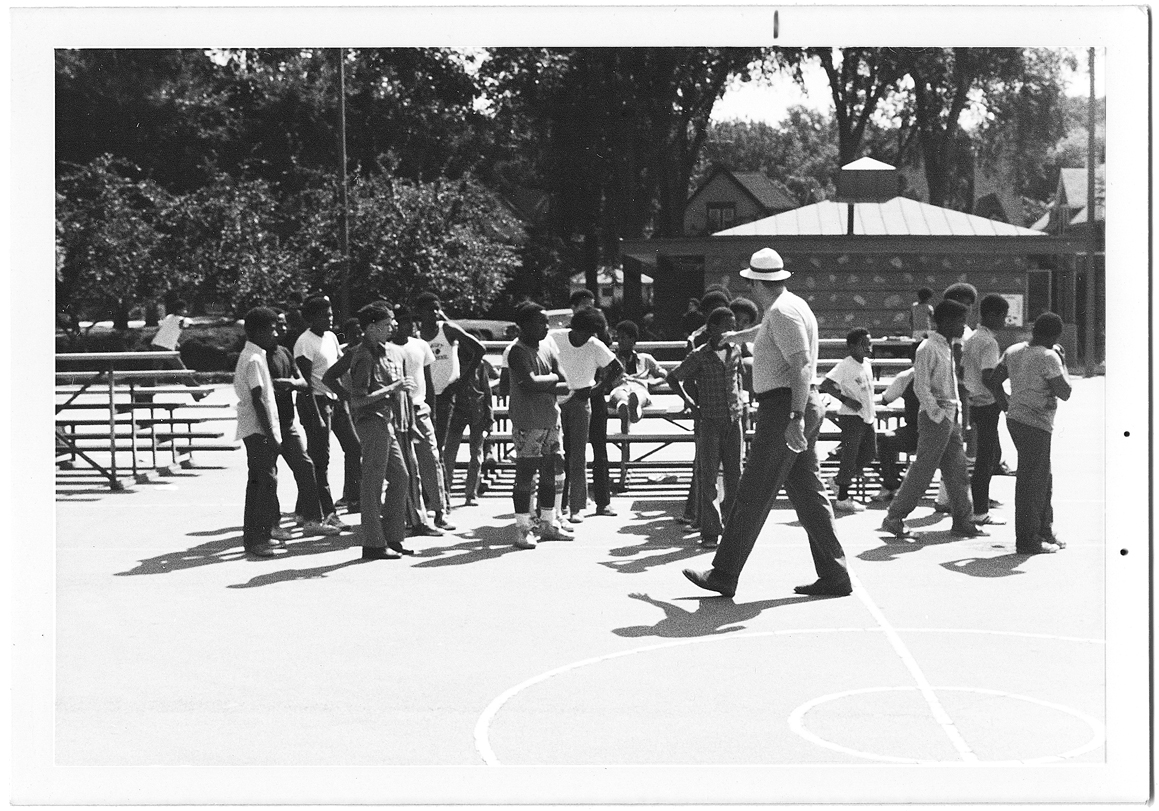 In 1967, Andrew Rodez, Howie Barksdale, Ray Sanders, Bill Logan, Henry White, Gene Bell and four other men formed the Fellowship of Afro-American Men, or FAAM. At its founding, the FAAM summer basketball program began, followed by a league of four teams consisting of all boys during the winter of 1968. In the following years, the teams expanded to eight by 1974.

Today, there are a total of 22 teams consisting of 14 male teams and 8 female teams. In addition, there are also two cheerleading squads. This equates to serving about 350 to 400 youths per season.

The impact FAAM has had in the community enabled them to garner local support. More than 70 volunteers and administrators assist yearly. “The season usually begins with the recruitment of students.” Gene said. “The board and volunteers meet once a month to go over scheduling, placement, and other business items.” Rick Marsh, formerly of the 1977 NBA team, the Golden State Warriors, was one of the volunteer coaches for many years.

Since FAAM’s inception, they have been motivated by “Harambee”, an African Swahilli word meaning “let us pull together”.

“We wanted to provide an athletic outlet, but we put education first.” Bill said. “If a student needed help in school, we would arrange for tutors, mentorship, whatever was needed for the student.”

Since 1995, FAMM initiated a learning center for participants and has become more of a requirement to attend two days a week if their grades deem it necessary. Participants must improve their grades and make the effort to do so. If not, then they are held from games.

Every year, FAAM generates its operational revenue through its annual tiered registration fees from participants throughout the North Shore. They supplement the revenue with an annual pancake breakfast and other contributions and grants. Throughout its decades of operation, FAAM has grown with the times.

“When we started, our focus was to mentor and provide programming for young Black males”. Bill said. “Over time, people from surrounding communities were sending their kids to us of all nationalities including girls.”

FAAM is still facing the tides of change. “Those of us who are left – the founding members are still involved,” Gene Said. “In order for it to keep on, new people need to come in and run things.” Of the founding members, Gene and Bill are still with FAAM. Gene holds the position of Commissioner Emeritus and Bill is Vice-President Emeritus as well as coach for 15 years.

When we started, our focus was to mentor and provide programming for young Black males

Looking ahead, the board is looking at establishing a “directors” position, looking into new funding sources and generating additional revenue for general operations. Space is also a concern. At one time the building of their own facility was entertained. Instead, FAAM continues to partner with existing facilities in District 65, 202 and City Parks and Recreation.

“Today our growth is constrained by physical space and time.” Dudley Brown said, former President of FAAM. “We need 48 spots in order for all of the teams to practice twice a week. Sometimes, we have to double up on courts. On game day we occupy three different facilities every Saturday between October and December. On top of that, we are always in need of new committed volunteers in all capacities.”

The Fleetwood-Jourdain Community center is the surrogate home base as most games are played there. The annual pancake breakfast, the awards night and monthly meetings are also at the center. “They have been extremely generous and supportive of FAAM,” Bill and Gene said in unison.

At the end of the season, teams come together at the annual awards banquet where team champions are awarded with trophies, academic achievements, essay awards, a scholarship program and other recognition. Nine awards categories are named after prominent people who had made significant impact in the community and with FAAM. Two scholarships are awarded to ETHS graduates who have been with FAAM for three years. The FAAM basketball season runs from September thru March. However, planning and organizing is an all-year activity.

To FAAM’s credit, they have been an influence to hundreds of youth. Some notables who went on to professional sports include Cecil Martin with the Philadelphia Eagles, Everette Stephens with Indiana Pacers and others in college leagues. “I was involved in FAAM when I was young.” Tony Stephens said. “In a way, they influenced me to start the NorthShore Basketball Camp. FAAM is a valuable asset to the community.”

Fellowship of Afro-American Men celebrated its 40th anniversary in 2008. The city of Evanston honored the organization with FAAM’s logo on the city’s vehicle sticker for that year.

What has began as an urgent grass-roots organization addressing the extra-curricular activities of Black youth, has turned into a multi-cultural educational, mentorship and sportsmanship organization serving 350 to 400 youth annually.

Sources:  The article first appeared in the printed version of Shorefront Journal, Vol. 8, No. 2, Spring 2007. Information for the article were gathered from the following sources: FAAM souvenir books; A general historical account of the organization written by FAAM members; Historic photograph provided by Henry White, Jr.; Shorefront audio oral history taped interview with charter members William Logan and Gene Bell on August 29, 2006 at the home of Gene Bell.