From the Shorefront Archives #003 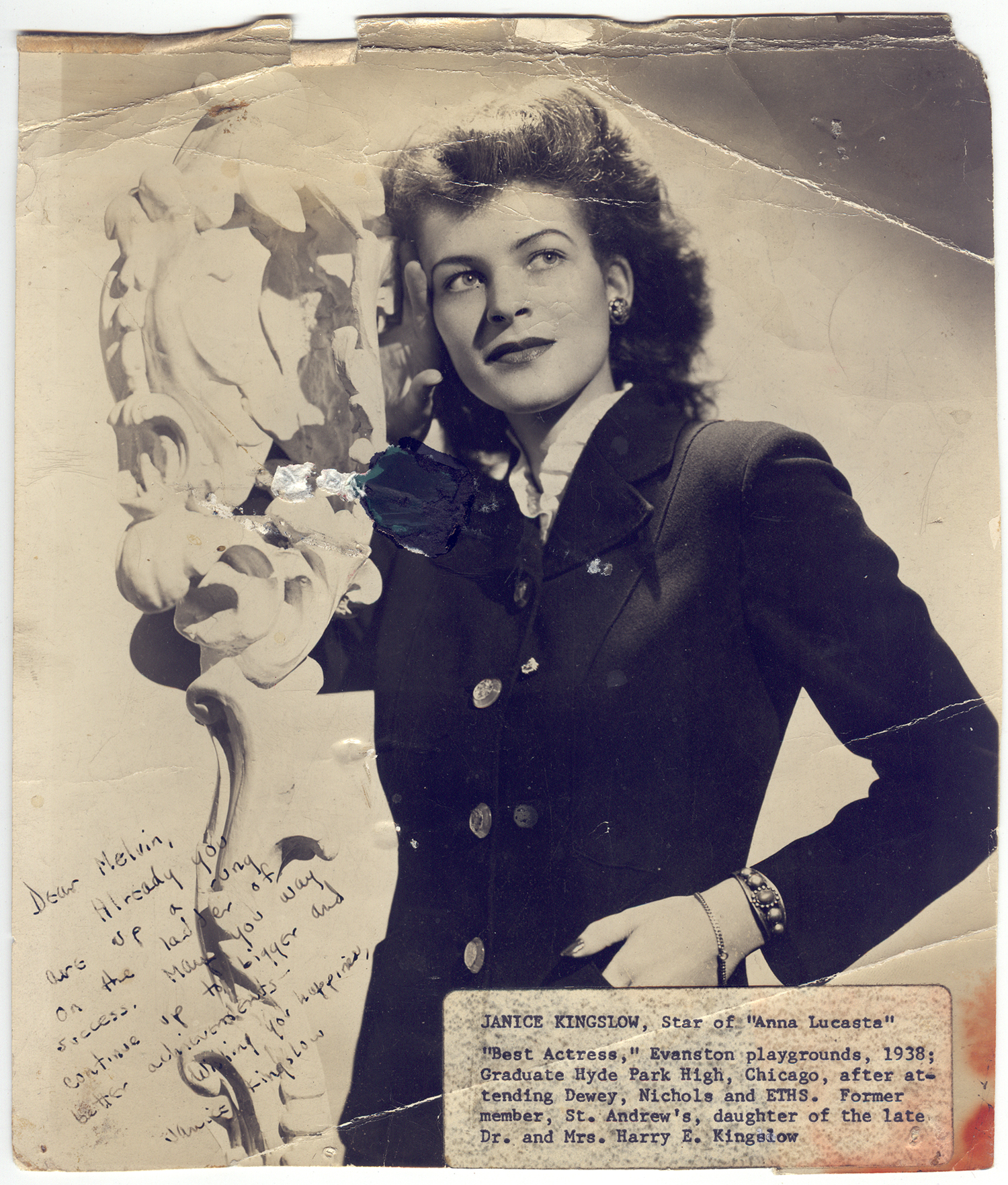 Often, researchers at Shorefront ask the question, “What was going on at this time?” when they come across incidents relating to their research topics. Sometimes, we fall into the trap of applying today’s thoughts to yesterday’s events that can lead to a misinterpretation of a past event. However, there are times when you come across a pivotal action that shaped the racial and social discourse across the nation. For today, a past event can have one reflect if discussions have changed or continue unchanged.

Janice Kingslow was one of several who, during the 1950s, sparked conversations in blending in, or not, in greater society. Janice, a well-known actress with a deal of a lifetime in front of her, chose a different path to maintain her identity.

Born in West Virginia to Harry E. and Virginia E. Warren Kingslow, the family moved to Evanston when she was just an infant. Her early years there led her involvement in St. Andrews Church and attended school at Dewey Elementary, Nichols Junior High School and Evanston Township High School. Her family moved to Chicago’s Hyde Park where she finished at Hyde Park High School around 1941.

What good was fame or money if I lost myself?

Janice’s career in acting began early performing as a puppeteer in various schools and other venues. Her big break took place in 1946 when she became understudy for Hilda Sims in the play “Anna Lucasta”, a role in which she eventually took over.

From there, she went on to perform in the Peabody Award winning radio series, Destination Freedom as well as Here Comes Tomorrow and Democracy USA radio series (1948-52). Janice was also one of the founders of the Chicago DuBois Theater Guild (1948).

However, when she was presented a Hollywood contract that would launch her career to new heights, there was a clause. In an article Janice penned, “I Refuse to Pass” that appeared in the May 1950 issue of Negro Digest, she wrote:

“What good was fame or money if I lost myself? This wasn’t just a question of choosing a pleasant-sounding false name to fit on the theatre marquee. This meant stripping my life clear of everything I was. Everything that had happened to me.”

In the contract, Janice was asked to change her name and take on a white identity.

In a conversation with newspaper editor, Melvin Smith, in the Evanston Newsette, she relayed a story to him while she was on a bus traveling home from Michigan. A “young white fellow” sat next to here and struck up a pleasant conversation. After a while he began to ask about her national origin. After going through a long list, he asked:

“’I am a Negro,’ Janice corrected soberly.”

Janice’s stance in her identity was an important part of her life. It leaves one to wonder what and who were her influences. Was it her parent’s influence? Her involvement in St. Andrews Church in Evanston – like many churches, known for instilling history and pride? Was it her self-determination? It leaves one to ponder the influences and historic implications.

Race, culture and identity had, for decades, been a hot topic of discussion. Yet, at the cusp of the 1960s civil rights movement, here was a young woman who chose to make a public statement than to sell her identity for financial gain. A choice she made during a time where many people of color, let alone one who could “pass”, faced career ending choices that played a part in changing the face of American history.