A Portrait of Helen Cromer Cooper 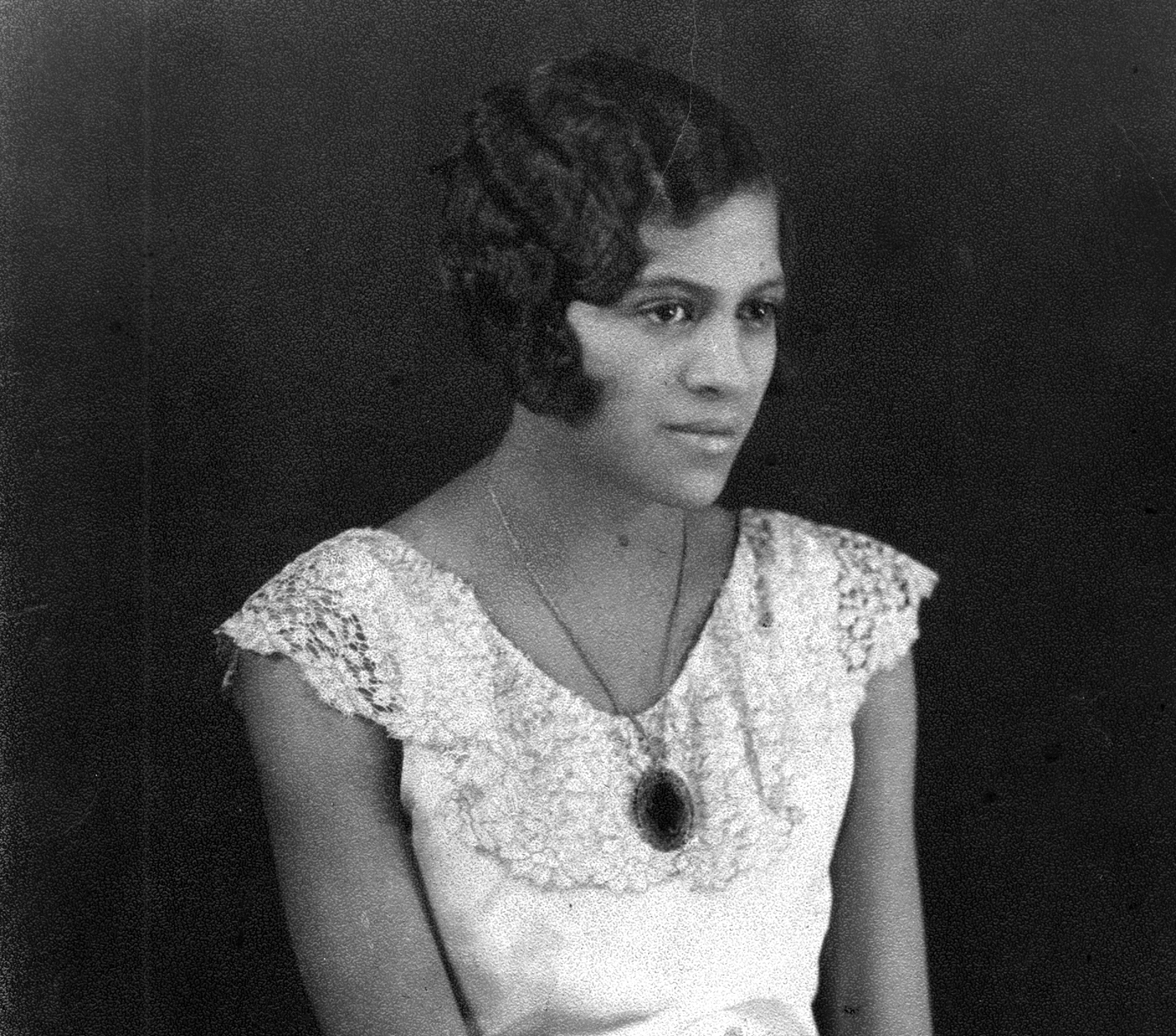 Helen Cromer Cooper was born in Evanston, Illinois in 1906, home to Northwestern University, one of the most highly ranked U.S. educational institutions, and, during her lifetime, to a burgeoning African American population as well. Ms. Cooper, a pioneering Black female Northwestern student (class of 1931), lived a long life in and outside of Evanston and died in her hometown in the year 2000.

Helen Cromer Cooper’s mother, Mrs. Helen Cornell Cromer, known to her friends as “Jinky,” was born in Hamilton, Ontario, Canada and later lived in St. Catherine’s, Ontario, Canada. Her father came to Evanston in 1897 with a White family and was biracial. Though Mr. Cromer’s familial roots are a mystery, she believed that “whoever it was who brought him [north], spirited him away, and I suppose for a better life”.

Ms. Cooper was baptized in 1919 at St. Andrews Church in Evanston, where her family faithfully attended services and activities. St. Andrews, which was founded in 1919 to serve residents of Evanston and surrounding areas, petitioned for mission status and served as a place of worship for many Black Evanston residents through its multicultural congregation. The church also served as an agent of change by challenging some of Northwestern University’s segregation policies, most notably a 1921 resolution addressing the denial of three women students of color in their request to use the University’s swimming pool. The resolution declared the University’s action deplorable and protested its racial discrimination.

Ms. Cooper enrolled at Northwestern University in September of 1927

Following her graduation from the Evanston Township High School, Ms. Cooper took some time away from school to work full-time and save money for the college education to which she aspired. Additionally, Ms. Cooper had to take several courses in order to gain admission into a 4-year institution. Unlike her White peers, she had some difficulty finding post-secondary employment. Despite being one of the best in her commercial courses, none of the places at which she was initially interested in working would offer her a position. She attributed her inability to obtain employment to racial prejudice. This lack of vocational opportunity, however, only seems to have strengthened her desire to obtain a college education.

Eventually, it was Ms. Cooper’s good fortune to find a job as secretary to Mr. Adam Perry, who had sought her mother’s assistance in catering for the Evanston Country Club. Mr. Perry encouraged Ms. Cooper’s scholarly ambitions and granted her time off to enroll in commercial courses as long as she was able to complete the work he needed done. Ms. Cooper described Mr. Perry as an influential member of the Black community, donating money to the Emerson Street YMCA and the Community Hospital.

Ms. Cooper enrolled at Northwestern University in September of 1927 and majored in sociology with the intention of going into the field of social work. Women had to be in the top 25% of their high school graduating class in order to gain admission to Northwestern University. Proud of her achievement, she retained her first tuition payment receipt of $173 through late adulthood.

Ms. Cooper balanced her scholarly life with numerous extracurricular activities in addition to her vocational responsibilities with Mr. Perry. These pursuits included participation in the YWCA, the International Club, and the Women’s Athletic Association. Ms. Cooper made numerous friendships in these organizations. However, she noted that the approximately 20 African Americans enrolled at Northwestern University at the time were not allowed to live in on-campus residence halls, making the environment at NU less than inviting.

Another influential factor in Ms. Cooper’s college experience and later life was her involvement in her sorority. As an undergraduate student, Ms. Cooper was initiated into the Alpha Kappa Alpha Sorority, Incorporated, Beta Chapter in Chicago on January 29, 1929. Alpha Kappa Alpha (AKA) was the first Greek-lettered sorority established and incorporated by African American college women. Ms. Cooper remained active in AKA during her time in graduate school and as a professional, eventually becoming president of the New York chapter. She maintained her membership for over 67 years, including 12 years of service on the National Board as the treasurer, and received one of the sorority’s highest honors in 1956 for service. As financial director, she assisted in the development of a more streamlined process for monetary transactions and operations of individual chapters, thus contributing to the overall wellbeing of the organization.

Ms. Cooper took some time out of her rigorous academic and work schedule to be, like her mother, civically engaged. This was evident in her volunteer work in the election of Edwin Jourdain. Jourdain, a graduate of Harvard College in 1921 and Harvard Business School, led a protest against Harvard’s enacted policy to exclude Blacks from freshman dormitories. . . In 1931 became the first African American elected alderman in Evanston. He also became Illinois’s first Black assistant school superintendent and was a lifelong activist, fighting for the desegregation of schools and public facilities as well as equal pay for teachers.

My senior year Blacks did not attend. . . you couldn’t get a ticket to the senior prom

Unfortunately, Ms. Cooper’s experiences at Northwestern were not all so positive… Being denied the basic rights that were afforded to the average White student, such as the use of the swimming pool, left her with negative feelings toward the university.

This exclusion was particularly evident in another incident that occurred during Ms. Cooper’s Senior Ball, a celebratory event that marked the end of Northwestern University’s senior class’s academic year prior to commencement celebrations:

“My senior year Blacks did not attend. . . you couldn’t get a ticket to the senior prom, so I got a White girl with whom I was very good friends to get tickets for me… One of the fellows, Louie Caldwell, who subsequently was a State Legislator here in Illinois, and I went. The next day there was an editorial in the Daily Northwestern, “Senior Ball Goes Black and Tan,” and questioning the judgment of the couple who attended”.

Difficulties for Ms. Cooper were not limited to the social activities. Ms. Cooper experienced what she considered racial issues in the classroom as well. Being told that an African American could not get an “A” in French class again dismayed Ms. Cooper.

According to Ms. Cooper, there were some staff members who were instrumental in her decision to pursue Social Work as a profession: My freshman year I talked with my adviser, a young woman over at Northwestern. I was vacillating between going into teaching; although, I had always said I didn’t want to teach, but into physical education or social work. And one of the things she asked me is if I had ever thought about the fact as a physical education teacher, as I aged, I would be less able physically; whereas, a social worker, my value would increase.

Her sociology fieldwork experience while at Northwestern proved to be a vocational turning point for Ms. Cooper. As part of her sociology program, Ms. Cooper began her internship at Hull House in 1928 and had the privilege of meeting Jane Addams, one of the first female Nobel Peace Prize winners and founder of the first American settlement house. Ms. Cooper served as a social work intern primarily doing group work specifically with children. Following her internship at Hull House, she worked at the Family Welfare Association in Evanston.

After completing her studies at Northwestern, she applied for graduate fellowships several institutions. . . The National Urban League and the university in Cleveland offered her fellowships, but she accepted the Mary C. Walker Fellowship (named after a pioneering African American teacher in California), which offered $1,500 per year for two years at the New York School of Social Work.

Although Ms. Cooper was an accomplished professional in social work, she was not immune to the overt racism during her tenure in New York. Her colleagues as well as some of her clients still looked down upon African Americans, even if they themselves were people of color. Positions of responsibility were more likely to be filled based on skin color than on ability or seniority.

Ms. Cooper explained, however, that even as a young social worker in New York, she was revered for her skills: “. . .even when I worked in New York with just case workers, I was given the problem people because I had great success in helping them”. . . Eventually, she was promoted to a position of management over 250 employees. Further facilitating her career however, she possessed a master’s degree in social work, a rare achievement for men of the day and even more unusual for women and for women of color, in particular.

Ms. Cooper’s rising years do not seem to have much affected her commitment to professional and community life. In 1958, she returned to the Chicago metropolitan area to be closer to her family. There, Ms. Cooper joined the Chicago Urban League. Ms. Cooper’s involvement in the Urban League led to her appointment to the commission that worked to integrate the city of Evanston’s elementary schools.

In her later life, Mrs. Cooper served as chair to the Evanston Commission on Aging. When she was asked why she became so involved in the Evanston community, Ms. Cooper explained that she “was fortunate enough to have parents who tried in every way to push me. I had people all along the way who helped me and. . . I had a responsibility to mankind. . . to pay back, to give of myself. . .”.

Ms. Cooper’s activism continued through the work of a number of neighborhood organizations. While there is scant mention of it in the interviews she granted, Ms. Cooper was also part of the Family Focus Advisory Board, an organization that has provided family support programs for parents, children, and teens in the Evanston area since 1976. Additionally, Ms. Cooper was part of The Links, one of the oldest and largest national volunteer service organizations of women who are committed to enriching, sustaining, and ensuring the culture and economic survival of African Americans and other persons of African ancestry.

As part of the North Suburban Coordinating Council Steering Committee, the Evanston Police Advisory Commission, and the Citizen’s Advisory Commission on Aging, Ms. Cooper kept herself both busy and meaningfully involved. She was long a member of the YWCA, the oldest and largest multicultural women’s organization in the world. She served well as a devoted member of the Unity Scholarship Committee. Ms. Cooper was active in civil rights initiatives and supported the cause for freedom and justice by participating in the 1963 March on Washington when she was 56 years old. She eventually became a lifetime member of the NAACP.

Note: This article is excerpted and edited by permission of the author for length from her Boston University School Of Education dissertation, Sourcing The Persistence: A Portrait of Helen Cromer Cooper by Shawna Cooper-Gibson. Submitted in partial fulfillment of the requirements for the degree of Doctor of Education, 2011. Source notes were mostly removed for readability. Full notation is in the submitted dissertation and most from a series of audio interviews conducted over a number of years. The dissertation, audio and transcripts are available in the Shorefront Legacy Center archives.