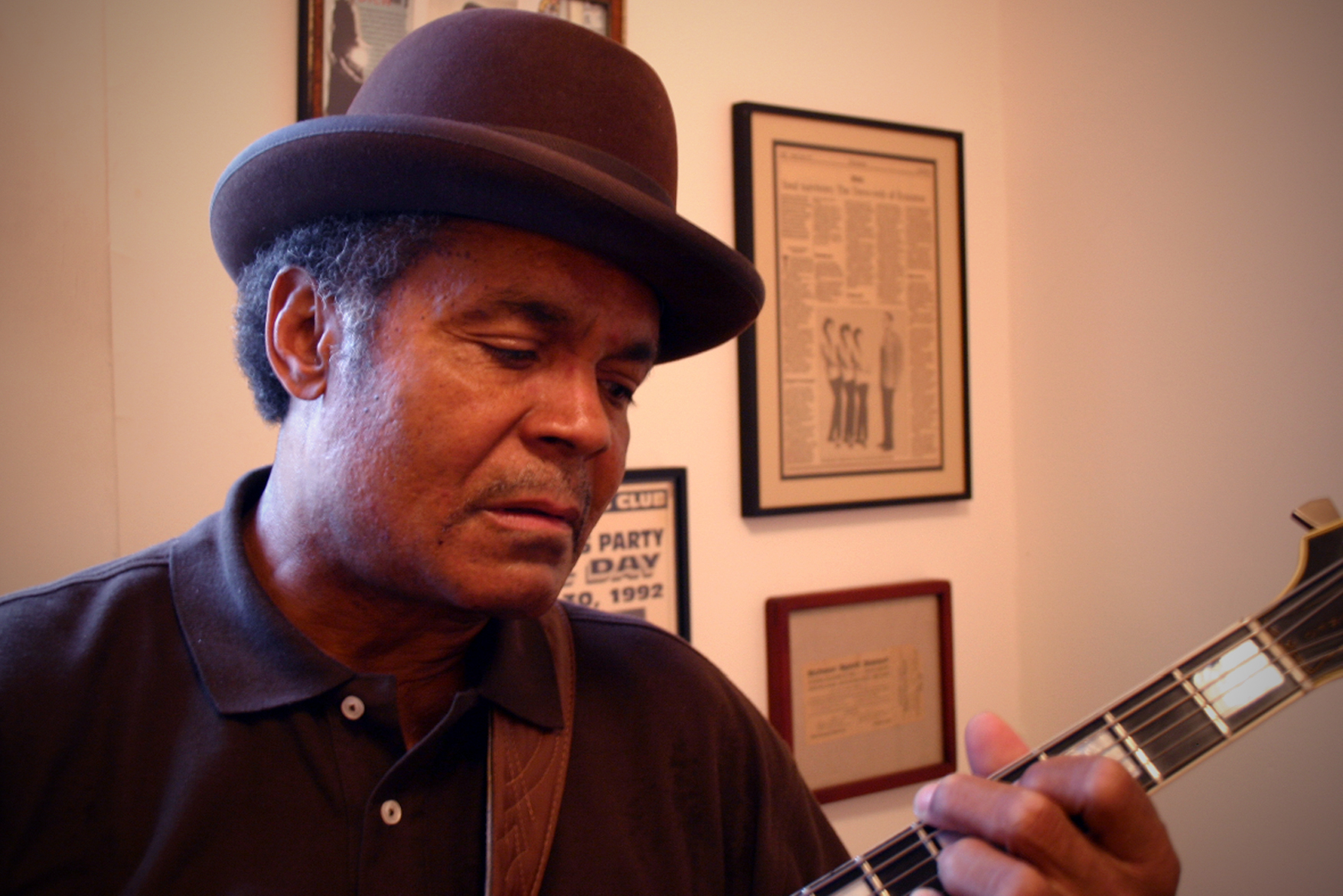 Carlton Black “Sheddin'” in his home.

Positioning himself on top a red bar stool, his vintage electric guitar propped on his leg. Plug in, adjust, twist of knobs, a bid of feedback, Mr. Black is back in a self-imposed school. The eight-foot by eight-foot room has one function – “Shedding”. The room walls document his accomplishments in music, past and present. “I only wish I started to play earlier in my life.” Black laments, repositioning his fingers and as if on cue he begins again, “Now its time to shred.”

His fingers tap along the long wood arm of his electric guitar, his eyes close as he begins to form new chords being composed in his head. After some time, Black stops, “You see, I started playing relatively late in my life, about 22-23 years old.” To his testament, Black has penned many songs and performed with several groups. Today, there are several modern musical groups covering the songs Black penned more than 40 years ago. He still collects royalties from his compositions.

Born September 30, 1944 to Mildred Minola Burnette of Memphis, Tennessee and Warren Black of Evanston, he attended Foster elementary, Haven middle and then Evanston Township High School in 1962. Blacks’ mother worked as a domestic. His father served in the military. For much of Black’s life he and his four older cousins, the Pryor’s, was raised by his grandmother, Esther Black and aunts Ellen and Mildred Black (same name as his mother).

After graduation, Black began his working career at David Lifhord Groceries on Chicago Avenue in Evanston. Later he was employed at a glass factory on Emerson Street. It was while working there when he discovered music. “While working at the factory, I would always come with a pen and a pad of paper.” Black says, “In no time, I had one hundred songs or more.”

“I never thought any of the songs I wrote would go anywhere. Some I threw out, some were prose or poetry, some I wrote for other groups.”

Reflecting on his life growing up in Evanston, he remembers that the local fellas always liked to sing. “Groups would form and sing on street corners, school hallways, at the Foster Center shower room.” Black says. “We would do it for fun and in competitive talent shows.”

One time we opened up for Marvin Gaye in Highland Park

Some of the groups Black remembered included the Velvet-Airs, The Hands of Time, The Naturals (the original group) and the Renells, a rival singing group. “There was a female group as well but I cannot remember the name. Anne Pope was in it. And Gloria. Its been too long.”

The Velvet-Airs was the first group Black was in. The group consisted of Richard Gibbins, Marty Lidell, Donald Pryor and Wellington Giles. The Hands of Time consisted of Barry Young, Lennorard Perkins, Billie Giles, Bobby Caldwell. Black later joined the DuVals. The music scene in Evanston was tight-knit. They were all friends, cousins, or loosely knew each other in the surrounding communities.

A Member of the Foster Brothers, Robert “Bobby” C. Robinson, and Donald Clay formed the record label, Boss Records. Boss recorded several musicians in the Chicago metro area and the Evanston group that Black was in, the DuVals (1962). Members of the group were Charles Joseph Woolridge, Charles Perry, Andrew Thomas, Arthur Cox and Carlton Black. “I was the last to join the group”.

The first two songs on the Boss label was “Cotton” written by Charles Perry and “What am I” written by Carlton Black. The “Cotton” was a minor hit in the Chicago area. Smash Records later pick up the group and they performed in various talent shows and record hops in high schools and colleges around the Chicago area. “One time we opened up for Marvin Gaye in Highland Park.” Black said.

The DuVals group eventually disbanded. Black then was part of a revised group, the Naturals. The original group, from in the 1950s, included Charles Davis, Charles Frazier, Keith (Dicky) Frazier and Richard Lee. A later changed up brought in Ike Wilson who took the place of Charles Davis.

“We wanted to honor the original group.” Black says. “So we brought back the name in 1963.” The new Naturals recorded at the legendary Chess Record Studios on Michigan Avenue in Chicago. There they recorded “Three Banditos”, “Let Love Be True”, “Hey Little Girl”, “Different Girls” and “Hey Fellas”.

An Evanston based companion female group, the DruVels, also recorded at Chess Records. “On the same day we recorded “Let Love Be True”, we assisted with the recording of “Tell Him” for the DruVels.” Black’s baritone voice became the iconic opener for that song. The lead singer of the DruVels, Patti Drew, later went solo on Capitol Records and produced four albums.

Black reflected again, that it was so many years ago. The music scene changed over the decades. He held a day job in the northern suburbs where he eventually retired from. Throughout the years, Black continued to play in local bars and clubs. He also continued to practice. If you see Mr. Black today, but you might possibly hear him first, ask him what he would be doing today. He may answer, “Going to the Woodshed”.

Note: From a recorded interview conducted September 13, 2008 (1:27) by Dino Robinson and archived at the Shorefront Legacy Center as well as sample selections from the Foster Brothers, The Naturals, The DuVals, DruVels and Patti Drew.  Additional information on many of the groups in this article can be found in Robert Pruter’s publications, Doo Wop, The Chicago Scene and Chicago Soul.