More Than a Store — Fleming Grocery and Market 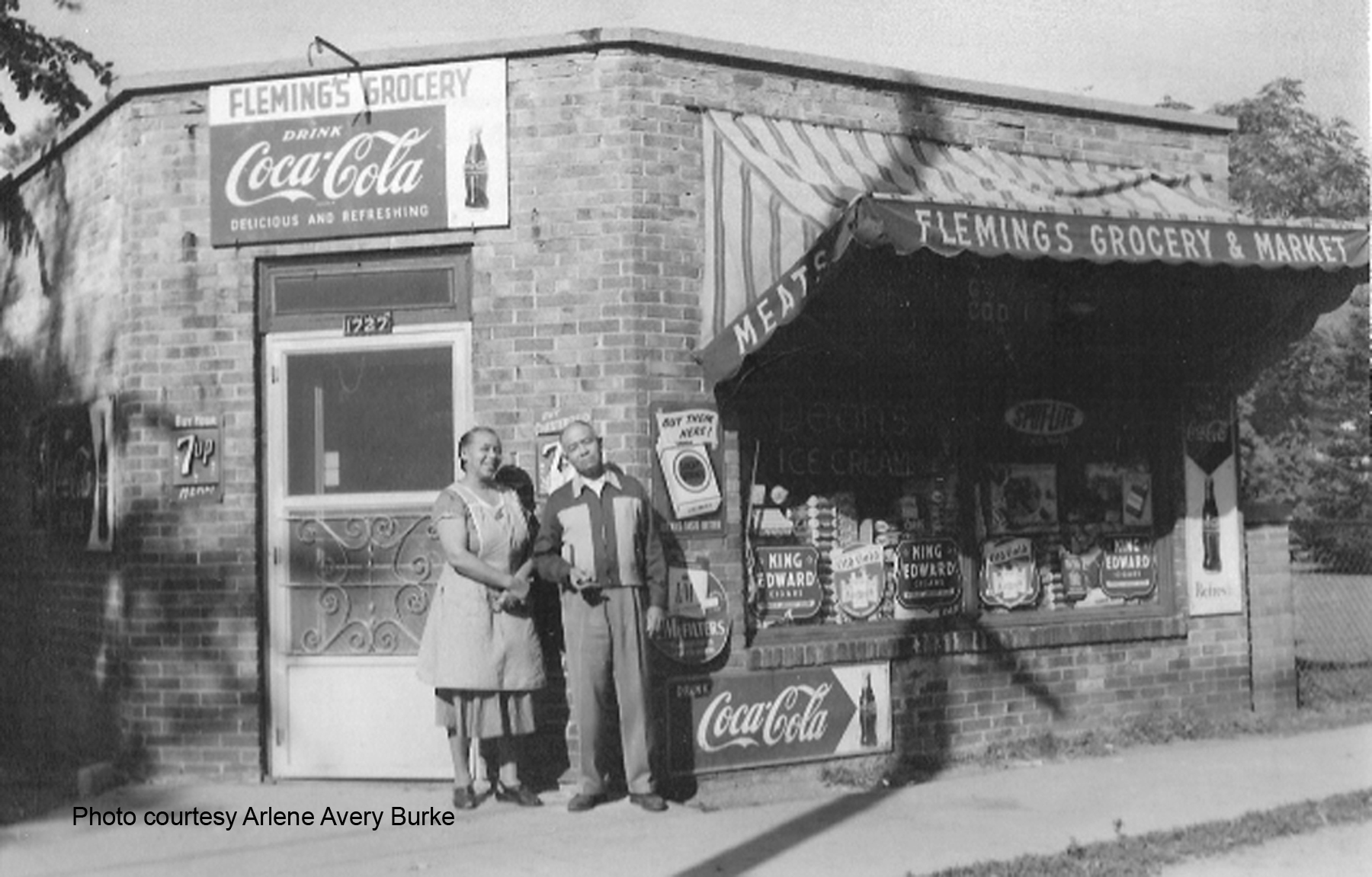 Fleming’s Grocery and Market, owned by John Fleming and Carrie B. Dent Fleming was the first black owned grocery store in Evanston, Illinois. Initially located at 1101 Clark in the 1920’s, it moved to 1723 Simpson in 1937. The store was located on a large plot of land that also included the Fleming’s personal home and garage. They could walk out the back door of their home and into the back door of the store in less than two minutes. Uncle John and Aunt Carrie worked around the clock seven days a week for many years making their store a financially solid mainstay in the Evanston west side community. Of course those Sunday hours began after church. Long before large corporate chain stores like Jewel and Dominick’s entered the community, customers did daily and weekly shopping with the Flemings who offered well stocked shelves of packaged goods as well as fresh produce and high grade meats.

Any time we stopped by the store or their house, we got popsicles.

As a young child I remember watching Uncle John behind the meat counter. My siblings and I loved to watch him put cubes of bright red meat in the grinder while turning the handle. At the other end long strings of ground beef would exit the grinder onto a white sheet of butcher paper. He would show the customer the meat; weigh it and then finishing wrapping it. There was no such thing as shrink wrapped meat in plastic containers. You picked what you wanted from the refrigerated case; pork chops, steaks, roast or chicken and then Uncle John weighed and wrapped it for purchase. The butcher job at Fleming’s also provided employment for numerous family members. I remember my father, James Avery, my Uncle Joseph Avery, my brother James Jr., a cousin Joey Avery and my Uncle Donald Avery all at one time or another worked the butcher counter. Steeped in this family grocery tradition, my Uncle Donald Avery and his wife, Laura eventually opened a convenient store in 1970 at 1623 Emerson Street.

The checkout counter was employment for my Aunt Grace Lee and her daughter Marva and other cousins as well. Aunt Carrie and Uncle John did not have children so these family employees were all provided by the children and grandchildren of William and Mary Elizabeth Avery, her sister. My grandparents William and Mary Avery lived one block from the store on Dewey. Many times she sent us to the store with a list pinned on our shirts and a wagon to pull the grocery bags back in.

When customers completed shopping at Flemings, they had two options. You could pay right then or put the purchase “on your bill”. Most chose the bill option. The bill was paid on Fridays after people got paid. Each family had its own receipt book with a purple carbon between two sheets. The top white sheet listed the purchases and was given to the customer. The bottom or yellow sheet stayed behind the counter. This was definitely an old school practice. But in a community grocery, you supported the community. Everyone pretty much knew everyone else and families and businesses trusted one another. Families used to send their children to the store with a note listing items for purchase. Aunt Carrie would fill the bag with items from the store and put the amount spent on their bill. On occasion, the note included permission for them to buy cigarettes! Liquor, of course, was never sold as Evanston was a “dry” town.

Some times Aunt Carrie would let us work the cash register. It had huge numbered keys that you pushed down and a bell rang each time the cash drawer opened. My sister, Marsha Avery Belcher’s favorite activity with Aunt Carrie and Uncle John was working that cash register. As groceries were rung up at the register, customers always made one last purchase of candy or gum at the counter. There was a huge pickle jar with whole dill pickles too. Aunt Carrie took one out with a pair of long tongs and put it into a narrow brown paper bag. The juice always leaked through making everything smell of garlic.

Having a grocery store in the “family” was nice beyond the temporary or part time employment. We had the best family picnics ever! Everyone bought a dish to share and as usual Uncle John barbequed. But the best part was when Aunt Carrie and Uncle John sent us kids into the store to get whatever we wanted as a treat. Most of my cousins went for candy, gum or chips but I selected ice cream. Popsicles were a given. We always had as much as we wanted of that. Any time we stopped by the store or their house, we got popsicles.

There were times Aunt Carrie and Uncle John babysat my sister and I when our parents attended dinner dances. When we got up the next day, Aunt Carrie must have cooked everything in the store for our breakfast. She would have fried sausage, bacon and pork chops, eggs, grits, toast, fruit, sweet rolls, biscuits and milk sitting on the table. We did our best to eat as much as we could but it never made a dent in what was available. Aunt Carrie would report to our mother that we had been good girls but we “didn’t eat much”.

Aunt Carrie and Uncle John retired once and left for Arizona. My father, James Avery and his brother Joseph Avery bought the store from them and continued in a co-owner operation. The Fleming retirement didn’t last long. In about a year they returned and wanted the store back. They didn’t know how to live without working sun up to sun down. Hard work was in their blood. My great grandfather James Dent had owned a grocery in Columbia County, Georgia in 1904. He also owned a plantation with his own blacksmith operation, saw mill, cotton gin, hay thresher, 100 head of cattle, riding horses, a 125 acre peach farm and stable of the best horse and buggy teams in the county. He owned the only ferry which everyone, black or white had to use to cross the river between Georgia and South Carolina. Entrepreneurship was in Aunt Carrie’s DNA. Even after Uncle John’s death until her own she owned and rented out the grocery on Simpson Street. Well into her nineties she handled the business, collecting lease money from the current store operators as she continued to live on the property. On many occasions the tenants would offer Aunt Carrie a ham or some other store item which she politely refused. You see, at the end of the month she expected her rent paid in full and did not want to have any discussion such as “but I gave you that ham on the 15th”. She was all about business!

Fleming Grocery was more than a store. As an icon of hope and independence in the black community, it was an early version of “yes we can”. Fleming grocery provided excellent service and quality foods. While it survived, it helped others to survive giving employment to family and “credit” without interest to a community who honored that faith in them by paying mostly on time. It was a place for family gatherings and a place for learning. Fleming grocery, more than a store, it was symbol and example of courageous entrepreneurship.